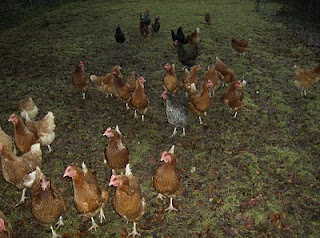 Well, the Eldest Son & KT left this morning for Heathrow to fly out to New Zealand this evening. They are leaving cold, damp, grey Wales for what is apparently cold, damp, grey New Zealand. Younger Son rang last night and reports that NZ is having its coldest January on record, and its their summer!
The Farmer is getting great amusement out of having been left a minutely detailed laminated list of instructions on how to run the farm in E.S.s' absence and I'm sure we will get phone calls checking up that everything is being done properly.
Anyone would think that we are ancient, decrepit and stupid, quite incapable of doing anything as it should be done!

I have been instructed on the egg collecting routine, but without the joy of a minutely detailed laminated list, so I must be more trustworthy, I guess. My only problem with the chickens is the electric  fence...I hate them!
The hens are great fun to watch with their enthusiastic scratching around in the grass of their paddock. They love people going over to see them because of course they expect food. When they run towards you  they look as though they have their hands in their pockets,which is very comical.

Walking the dogs this morning the sky was dull and grey though the horizon was blushed with palest mushroom pink which gradually became dove grey. The view across the valley was veiled with a faint smoky haze and sounds were carrying on the air from below the farm. I could hear one of our neighbours whistling as he worked and the cries of the children playing outside at our local primary school, which is about a mile away, were very clear. Its always a bad sign if we can hear the schoolchildren as it means it will almosr certainly rain within the next 24 hours...it hardly ever fails us as a warning of an impending downpour.
Posted by Jinsy at 04:23