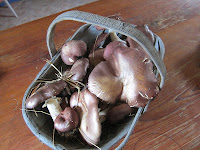 Just lately we have been experimenting with our friend G. The Mushroom Grower (http://www.maesymush.co.uk/) the cultivation of King Stropharia mushrooms. G. supplied the spore  which was 'sown' into a heap of straw and we waited to see what happened. We were all pleasantly surprised when a superb crop emerged. The picking of them is critical as once the caps have begun to flatten out they atre well past their best so a close eye has to be kept on them as they can change from ready to passed it in just a few hours. The cropping seemed to coincide with the full moon and we harvested about 6-7 kilos of mushrooms over three days which is remarkable. We are now waiting to see if thre will another crop with the next full moon. King Stropharia's taste very good with a flavour rather like hazelnuts, delicious fried in butter until going brown around the edges.

Yesterday the Farmer & I travelled to Cardiff to take part in an exhibition put on by the Countryside Alliance (http://www.countrysidealliance.org/) at the Senedd, the Welsh Assembly in Cardiff Bay. We had been invited as representatives of the Countryside Alliance Foundation to showcase the importance of Outdoor Education through our work with schools coming to see the farm. We spoke to a number of interesting & interested people (no Assembly Members though !) & it is encouraging that even though the politicians do not seem particularly interested in getting children out of the classroom & into the countryside many other people are.
The Countryside Alliance Director Sir Barney White-Spunner was there & the various aspects of country life were well represented by hounds from the Glamorgan pack with their huntsman & kennelman, falconers, fishermen, game shooting & general country activities. The atmosphere during the day was very good and there were no anti-hunting noises heard and the general public & the people at the Assembly were taking a keen interest in the subjects & issues raised by our presence in the building.
The day had been organised by the wonderful Rachel Evans who is the Countryside Alliance Director for Wales. She worked incredibly hard to get the whole event up & running and it all went extremely well.
We had a very enjoyable day despite having to cope with city traffic which we are no used to at all...we are such country mice!!!!
Posted by Jinsy at 07:01 No comments:

After a week of appalling weather we have had a day of sunshine & its so lovely to see blue skies and the sunlight gleaming on fresh oak leaves in the trees around the house. Spring is so late, the gardens are very slow in getting going though the fruit trees have blossomed, but it may have been too cold for the pollinating insects to have gone about thier work, certainly our bees have not been out very much lately.
After my worries few weeks ago that the swallows had not returned on time I was greatly relieved when about a week ago they were suddenly here in numbers and are now wheeeling and cavorting around the buildings. Did they know it was too cold here and that there would,be no insects for them to feed on so just bided their time?
The cows are now out properly and the Sons have been busy muck-spreading again despite the rain & fortuantely have not made too much mess in the fields.

The Farmer & I attended a 'literary lunch' today in Newcastle Emlyn. We had been invited by an old friend to go to an annual lunch given by the Allen Raine Celebration Society. Adeliza Evans was, or is again, a celebrated 19th century authoress who was born in Newcastle Emlyn in 1836 & wrote under the name of Allen Raine. She produced a number of 'romances' which were hugely popular and sold over 2 million copies in Great Britain & the Empire, to say nothing of the sales in the USA. They were so popular that three of them were made in into silent movies in 1915 & 1920. She wrote her tales in English but used many Welsh phrases & expressions and her upbringing in Newcastle Emlyn & the surrounding area forms the background to the stories.
As well the annual lunch (which was excellent) the Society runs a short story competition. See http://www.allenraine.com/ for details & more information.

Last weekend we visited a local  'green wedding' venue, Ceridwen Centre that is run by some friends of ours. They have erected a superb twin tipi as the wedding venue which is quite beautiful and surprisingly spacious...it can hold 120 guests and is a lovely setting for weddings with a difference. http://www.ceridwencentre.co.uk/

As I write this the Farmer is playing music with some friends who have come over. I have a violin, cello & piano playing Mozart in the background, my own private recital, how lucky am I!

During the week we had a visit by a local primary school. A group of 25 4-7 year olds came over on a damp day last week but fortunately the real rain held off until they left so they were able to be walked across the fields though lunch had to be eaten in one of the barns (in the company of the peacock who was a little alarmed at his place being invaded by chattering samll people). After lunch the rain stopped long enough for us  we to spread a tarpaulin out on the yard and get the children to sit and draw anything they had seen on their visit. Many of them drew the farmhouse and Molly the sheepdog who is always a great favourite on these occasions.
Posted by Jinsy at 13:12 No comments:

May Day and we are blustering into the month with tempest, wind & rain. It is proving to be a very slow cold spring though the birds are singing cheerfully & certain plants are flowering though the hedges are not fully green yet & trees are still skeletal in outline. The oak trees are beginning to show glimmers of greeny-gold leaves but the black ash buds are still tightly closed...'Oak before ash in for a splash...' are we going to have a dry summer?
Our fruit trees are coming into blossom and so far the blossom has managed to stay on the boughs despite the battering winds that have been howling around us.

It is such a cold spring and for the first time for many years the dairy cows are still coming in at night at this time of year and we are struggling to make the silage last. Once the weather warms up after the rain of recent days the grass will romp away, though the forecast is not very optimistic about an improvement in the weather very soon.

In spite of the unseasonal weather our guests in the cottage &  the gypsy wagon continue to arrive and spend happy times discovering the area. To come back to a roaring log fire after bracing walks on the beaches is always good.

Tomorrow we have our annual Soil Association inspection so the Farmer is spending time sorting out the paperwork and getting everything ready. The paperchase as usual is hideous involving purchase receipts, lists of ingredients in any bought-in animal feeds, as well numbers of livestock of all kinds, how much farmyard manure is applied, how much muck our pit holds, how much silage we make or buy in & proof of its organic origin...the traceability of everything is paramount & rightly so
We attended a meeting last week with representatives from OMScO (http://www.omcso.co.uk/) for our bi-annual update on the state of the organic market. It was very shocking to learn that the UK is the only country world-wide where the sales of organic food are dropping. In Europe, the USA, Australia, New Zealand & elsewhere production is struggling to keep up with demand. Much of our milk is still being exported. Why do Britons not want organic food? The excuse given is price, but in actual fact organic food is no more expenbnsive than conventional & sometimes cheaper. The market is controlled by the four main supermarkets & unless they are prepared to be interested in organic food, which they are not, the consumer will not even think about buying organic.