A Brief Change in the Weather, Filming with BBC 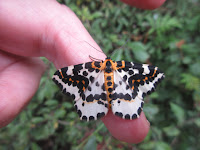 We have had rain! Not much admittedly, but enough to damp the dust. It was only fine drizzle really and of short duration and certainly will not make any real difference to our parched fields. We are now under grey skies with an oppressive humid atmosphere which is certainly a change from the clear blue skies and bright sunshine of the past weeksbut not so pleasant.
I saw this gorgeous Magpie butterfly while walking the dogs in the dampness. It was struggling through the wet grass so I carefully picked it up and placed back in the blackthorn hedge which is its proper habitat. 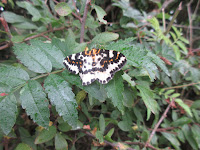 This past week saw another visit from the BBC film crew continuing their work on the project that has kept them & us busy since since March. The filming is now drawing to close and once the editing has been done, the voice-over and music recorded and everything finished to the BBC's satisfaction the programme should be due to be broadcast later in the year. I have seen some of the rough-cut footage and it is lovely, we were told it would be a very beautiful film and so it will be. The title is till being kept under wraps.
The ducks and pigs that we had to bring in have all grown well. Indeed the pigs are now ready for slaughter but until we have permission from the film company we have to keep them on, getting fatter whcih is not so good as they will getting past being porkers and turning into big sows. The ducks which arrived here as cute fluffy ducklings are now handsome full grown ducks and lead a happy life going to the pond each morning and then bringing themselves back to their pen in the late afternoon. 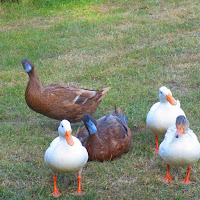 It is the season for soft fruit and the Farmer has brought in blackcurrants which I shall make into jam later. Despite the lack of rain over the past weeks the blackcurrants have done well though our raspberry crop is almost non existent, sadly, as they are quite my favourite of the summer fruits.

We have had a lovely German family from Frankurt staying in the holiday cottage for the past two weeks. It turns out that Herr M. is a very talented musician and specialises in rennaissance music but is skilled in other musical disciplines as well, so much so that after hearing the Farmer playing some traditional Welsh dance tunes he set to and has composed a piece of music for us, entitled Penyrallt Rondo, which is quite lovely. It is based around typical Welsh tunes but with an interesting variation. A really lovely gift for us and one by which we will certainly remember these guests. 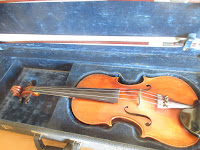 Our German guests leave today and disappointingly we have no more holiday-makers arriving for the next two weeks. It is proving to be a very difficult year for the holiday accommodation business here. Not just us but all our friends and acquaintances who run holiday cottages, glamping sites and B&B's are saying the same thing. I certainly have never had empty weeks in July & August before and one just hopes that last minute bookings will come in. No-one can come up with a good reason why bookings are down this year. (It can't be the Trump effect!) Admittedly there is an over-supply of holiday accommodation but even so one would hope that the glorious weather might encourage more 'staycationers' to come and discover lovely west Wales.
(For all availability in Penyrallt Fach Cottage please go to www.penyrallt.co.uk)
Posted by Jinsy at 01:35 No comments: 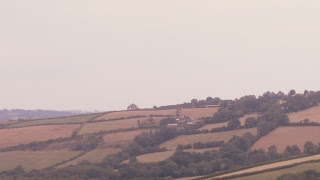 The heatwave continues and the view across the valley is no longer one of lush green fields with plenty of grass but on of dry brown, parched land broken up the the hedges whuch are managing to remain green and clumps of woodland. The fields are almost crisp as one walks across them and we all dread a carelessly thrown cigarette butt or piece of glass or even a shiny can refecting the light into a tinder-dry patch of grass. While we have been fortunate in this area not to have wildfires breaking out on our moorlands it could so easily happen with everywhere so dessicated.
The fields are not able to provide the cows with all their food at present and many farmers, including ourselves are having to feed silage that was intended for the winter. What the knock-on effect of this will have on milk production and fodder supplies when winter does come is anyone's guess.
We are fortunate that our water supply is holding out. We do not have mains water anywhere on the farm and are reliant on springs and a bore hole. Some thirty-odd years ago when we had a couple of very hot dry summers our water supply was low and all water had to be given to the cows as a priority (they need at least 10 gallons each a day)and we gave them free access to the little river at the bottom of the farm. I had to take the Sons, who were very little at the time, down to kind neighbours in the village for baths and do my laundry (I didn't fancy taking it down to the river and banging it on rocks!). We are not in that situation this year and our water supply has been added to by a recently drilled bore hole but I do keep waiting for a hint that we need to go steady on water consumption in the house.

Despite the lack of rain the roses this year have been superb. Apparently they liked the hard frosts of the winter. Looking out from the office window there is wonderful tumbling froth of Kiftsgate which even now after a couple of weeks of flowwering is till looking good. The other, mostly anonymous, roses in the gardens are doing well and give a splash of colour where most other plants are really struggling with the hot weather but not so much in that they are thirsty as in the sun shrivelling up their buds before they have chance to open as has happened on a large hypericum which should be covered in gleaming yellow flowers and instead has dried up tight little brown buds.
Below are Kiftsgate, Cuisses des Nymphes & Willy Lobb. 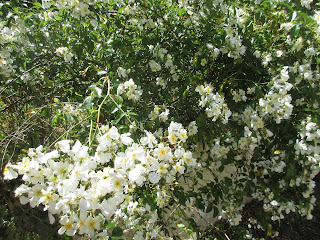 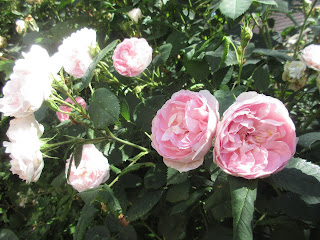 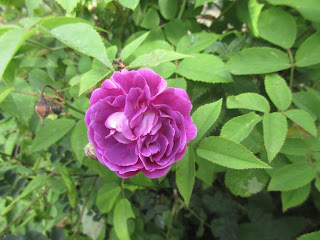 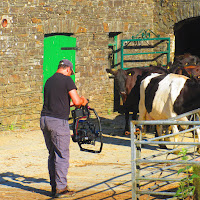 Another very busy week having had some friends from London staying for a long weekend. We took them over over to the coast one evening with the canoes, a primus and a frying pan and cooked supper on the beach as the sun went down, an idyllic end to a very pleaant visit.
The film crew from the BBC then arrived for two more days of intense busy-ness. Most of their time was spent with the Farmer filming the chickens and thier behaviour in certain situations such as how they react when a kite that looks like a bird of prey is flown over their run. Apparently some very good footage was taken with the poor hens geting rather panicky. When the poultry session was ended it was the turn of the cows again and they were walked into the yard and then back out to their field and again some good shots were obtained. The project has been going on since March (see previous posts) with the film crew arriving here every few weeks to film farm animal behaviour and should end up with an interesting programme. I will keep you posted on its title, as yet a closely guarded secret that I'm not allowed to reveal, and its broadcast date which should be sometime in the winter. 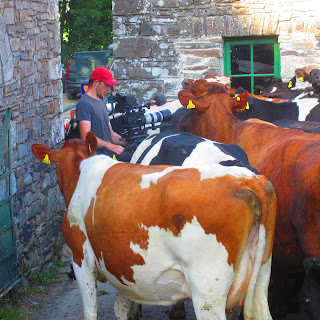 The very hot weather continues and whilst is glorious and wonderful to have a proper summer such as one remembers from childhood it does make doing anything rather trying. The Farmer comes in dripping with perspiration and needing to change his shirt after being out fencing or moving the sheep. I often make lemonade in hot weather and yesterday afternoon the Farmer came in, with a neighbour in tow, asking for some but of course I hadn't made any in readiness so he decided to do it himself...with the result being that having failed to secure the lid on the liquidiser jug properly it spun off and we had lemonade and all the bits of chewed up lemons all over the kitchen wall running down to the floor, dripping into drawers and generally making a real mess that was very tedious to clear up and a waste of good lemons! The Farmer's comment was thank goodness our neighbour was there to witness the disaster as it reduced the level of wrath unleashed upon him by the Farmer's Wife! The neighbour, needless to say,thought it all hilarious! 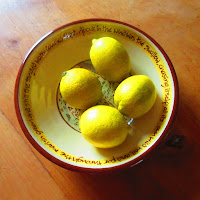 With the intense heat of the days by late afternoon the Farmer has been doing a bit of wild-swimming (swimming with dragon-flies rather then dolphins!) in one of our ponds and encouraging the dogs to join him as their are finding the heat very difficult, especially the black labs, but even Molly our old lady sheepdog will go in with persuasion and clearly feels better for it afterwards. 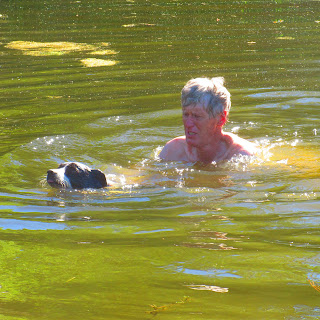 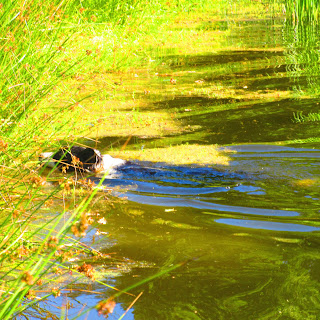