TEIFI - FROM SEA TO SOURCE

It is always a good moment when a project comes to fruition & last night saw the culmination of what has been a long and fascinating experience in film-making.

The Farmer & I belong to an independent tourism group, the Teifi Valley Tourism Association (TVTA) which was set up 4 years ago to promote the beautiful part of west Wales in which we live. Four years ago the membership stood at 9 businesses, now it has over 70 small local businesses listed, mainly holiday accommodation providers, artists & craftspeople.

As an independent organisation we have without any grant funding or outside sponsorship, produced a film showing the wonderful and varied landscape of the the Teifi Valley from the air.

I was the producer & scriptwriter and our good friend G. of Maesyffin Mushrooms who had in a previous life worked in film, directed & edited the film. Another friend who owns a small light aircraft was drafted in to fly the entire 75 mile length of the River Teifi with a small but incredibly clever camera attached to one of the wing struts of the plane. This all sounds very Heath Robinson but in fact with the state-of-the-art technology of the camera it was anything but.
The resulting footage was superb. What was a 2 hour flight following the course of the river from the estuary in Cardigan Bay to the source in the hills of mid-Wales has now become a beautiful 35 minute journey through a dramatic and ever-changing landscape.

The filming was only the start of a very long process involving many months of editing, script-writing & hours sitting at the kitchen table researching the history & stories of the valley & continuous emailing over small points of editorial and details in the script.

In addition to the narrative script we recorded music of the valley, some of which was played by the Farmer on fiddle. We were incredibly fortunate to be given permission by Ceri Rhys Matthews, of the acclaimed Welsh folk band Fernhill, who lives in a small village near by, to use some of his recordings and also a talented harpist Harriet Earis arranged some traditional tunes from the Teifi Valley and recorded them for us. As result the sound track for the film is as beautiful & haunting as the landscape it portrays.

Our script was read for us by the actor Richard Mitchley who lives in the valley & we were given permission to use a poem about the River Teifi written by a noted Welsh bard 'Cynan'. The voice-over is a lovely mix of English interspersed with romantic rolling Welsh poetry.

The cover illustration was supplied by the local artist Diane Mathias. She allowed us to use one of her lovely paintings of one of the many handsome bridges that span the Teifi.

As you can see the emphasis was very much on keeping the whole project as local to the valley as possible.

Last evening we had the premiere of the film at a delightful venue, Waunifor Centre near the village of Maesycrugiau, in the heart of the Teifi Valley. As well as showing the film for the first time to the members of the TVTA we had invited lots of friends. local press & community councillors from the length of the valley. After a welcoming buffet of  biscuits & local cheeses washed down with a glass of wine the film was played to what turned out to be very appreciative audience.

As a project run on minimal funding and many hundreds of voluntary hours the end result was well worth the effort and goes to show that all that is required is enthusiasm, energy, imagination & a commitment to producing a good a piece of work using the skills of a network of people who believe in the project & have an understanding of a sense of place.

The film can also be viewed on http://vimeo.com/teififromseatosource

The last three days have been spent doing some much needed renovation & maintainence work on the holiday cottage.
This work is usually done in February when we have very few booking but this year of course the weather was so atrocious that it was impossible to do anything. So, this week with lovely dry weather & a gap in the bookings  we got on with the replacement of rotted window frames & the threshold of the front door.
Of course the whole job just growed like Topsy as it always does until I found that I completely re-painted all the windows front & back and the front door several times over... primer on the sections of new wood, undercoat, top coats x 2 on everything and various little touching-up patches around the whole building.
I was out at 6.30 in the mornings wielding my paint brushes like a woman possessed in order to get the requisite number of coats on and dry before the arrival of our next guests today. Considering the work started on Thursday evening I've done jolly well, though I say it myself.

With the wonderful weather the Farmer & the Sons are frantically busy making silage. They mowed last night & this morning and now just after lunch they are out picking up with the forage wagon. It seems there is good crop despite the gloomy forecasts after the desperately slow late, cold spring.
The Sons have been off doing other peoples silage since the beginning of the week and as soon as our own crop is in the clamp & sheeted up they will setting forth again to various neighbouring farms. 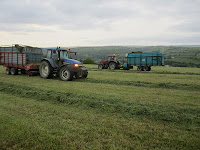 Posted by Jinsy at 06:19 No comments: Links to this post