Yesterday I travelled down to Llanelli with some friends to attend the 7th Carmarthenshire Tourism Summit at the Parc y Scarlets Stadium. (The Llanelli Scarlets are one of the major rugby teams in Wales www.parcyscarlets.co.uk)
The event was held by the Carmarthenshire Tourism Association (www.carmarthenshiretourism.co.uk/visitcarmarthenshire.co.uk of which I am a member. Tourism is of huge importance to the county, as it is to the whole of Wales, and it is estimated that it is worth somewhere in the region of £350million to the county alone. The summit is a chance for those of us involved in the 'visitor economy' to meet other businesses and to listen to their experiences in running tourism-based businesses of all kinds and sizes. There were exhibitors promoting a vast range of good and services that are useful to tourism businesses, artisan food producer, visitor attractions, artists & craftspeople who run courses, accountants, energy suppliers and much else.
Great emphasis was laid on the use of social media in marketing and though we can all quote how many hundreds of followers on Twitter (@PenyralltFach) or likes on Facebook we have, what really matters is how many bookings we get and I am not aware from the bookings I get that many of them have found my cottage through either Twitter or Facebook. I have yet to be convinced that social media is little more than a chattering post. (And yes, I admit I do tweet about the cottage and the Teifi Valley despite my cynicism!)

We had a thick milky mist shrouding the farm this morning and as it has lifted the valley has become bathed in sunshine with blue skies and a glorious day has appeared. Our guests in the holiday cottage have gone up into the hills to find the source of the river Teifi. It will be beautiful up there in the wilderness of the empty moors with only the bleat of the sheep and mewing of the buzzards to break the peace. 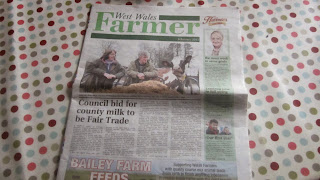 I have just submitted our first column to the West Wales Farmer for publication next week in the Carmarthen Journal. It has been fun learning how many people have seen the introductory piece in the first issue of West Wales Farmer and how encouraging they are about the column though it does put a certain pressure on us to make the column consistently interesting especially when so many of the readers are farmers like ourselves and who experience the same situations as we do.

Last night I attended the first meeting of the Visit Teif Valley group (www.visitteifivalley.co.uk)of which I am a founder member. We have set up this organisation to promote this beautiful part Wales that is so little known. We have a Twitter account @VisitTeifi and a Facebook page. Please follow and/or like us on these sites.
Our membership is growing and we have an interesting range of people getting involved including accommodation providers, artists, craftspeople and artisan food producers. The variety of talent in the valley is amazing and many studios, galleries and workshops are open to the public.
Places to stay are also incredibly varied, from sweet cosy farm cottages like ours (www.penyrallt.co.uk)to yurts, tipis & 'glamping' in all its forms. We also have members who run residential courses covering all sorts of subjects & skills. (www.visit Carmarthenshire
Visit Teifi Valley is an independent organisation but we are working collaboratively with Carmarthenshire Tourism Association (www.visitcarmarthenshire.co.uk)and Ceredigion Tourist Association (www.discoverceredigion.co.uk)with the common aim of encouraging visitors to the Teifi Valley. It is an area so rich in history and an extraordinary diversity of landscape from the source of the river high up in the Cambrian Mountains down through the fertile river valley to the estuary in Cardigan Bay. 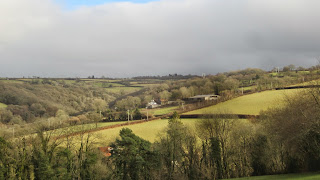 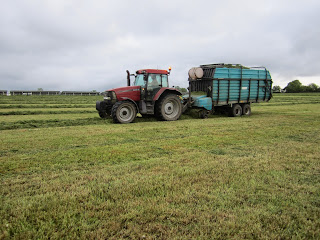 There is a campaign running at the moment by the NFU called Back British Farming ()and some very interesting statistics are given;
Britain is 60% self-sufficient in food which means that there is enough food to last for 219 days
In 1991 there was 75% self-suffiency
86% of consumers want to buy more traceable food produced on British farms
The NFU is encouraging consumers, the food industry, politicians & retailers to Back British Farming. The NFU president, Meurig Raymond has said 'What we need now is for farming to be at the heart of decision-making across the wider food industry and government...'.
Of course as farmers we are at the mercy of the weather and we have been experiencing extremes of weather in the past few years, 2012 was the second wettest year in a century & 2013 had the coldest March for 50 years. The weather highlights the vulnerability of farming and the natural resources of the land that we farm have to be protected and cared for within the political & environmental frameworks that are put in place while we still produce food.
The campaign highlights the many reasons for supporting British farming which contributes to the economy, the environment,animal welfare, renewable energy and many other issues.
To understand the meaning of self-suffiency it must be said that it does not mean eating food that is only produced in Britain. It is actually used as a measure of how competitive the country is in food production and how much we produce. £12.8 billion worth of food is exported. The amount of food & drink exported by the UK has doubled since 2005.
BACK BRITISH FARMING 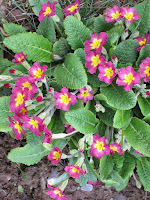 Whilst the daffodils are really bginning to start their glorious parades around the farm and the snowdrops are gleaming like pale lanterns tipped with green in the grass of the orchards and along the drive in the garden there is more colour showing with the polyanthus opening thier parasols of plum and cerise. They give a lovely contrast of rich colour to the still dull beds although my Lenten roses are beginning to show thier colour too now.

We were all very amused this morning when the Farmer on opening the post gave a great shout of laughter on recieving an advertising flyer from a bull semen company (!!! You have no idea how very basic farming can become over the breakfast table!) The slogan on this leaflet was 'Fifty Shades of Black & White' with a cartoon drawing of a leering Friesian bull in grey striped necktie. Even the artificial imsemination industry has jumped on the ludicrous bandwagon of the book & film! Thanks www.sterlingbullsonline.co.uk for a clever joke!
Posted by Jinsy at 01:51 No comments: