The first primroses are flowering in the hidden corners of the garden and hedge banks. They look so modest and retiring compared to the flamboyancy of the daffodils which are trumpeting their presence everywhere. After a night of strong winds & heavy rain many of the daffs are looked a bit worse for wear this morning...quite literally hung over as the rain has knocked many of them to the ground unable to lift their heads to the sunshine. Those that have have actaully bent or snapped their stems I bring into the house and they look so cheerful in a blue vase on the kitchen table.

Lambing is over now and the Farmer is happy with the result. Inevitably there were a few losses but the vast majority of births resulted in good strong lambs with mothers producing plenty of milk. They are now all out roaming in the fields enjoying the freedom & the sunshine. I came across a group of about 10 lambs all lying stretched out on a sunny bank looking for all the world as though they were on a tropical beach somewhere, all that was lacking were the sunglasses!

With the spring weather the cows are milking well although our cows are not out yet. We called on friend yesterday who with his son has just gone back into milk after a break of several years. They have invested in a new parlour and a herd of Jersey x British Friesian cows and are very optimistic about the future of dairy farming in Britain. At the moment there is huge demand for dairy product from China, India & Brazil which is keeping the dairy industry here bouyant.
I was very pleased to read this week that organic sales in the UK are on the rise at long last. It has been a hard couple of years for the organic sector but things are beginning to look up.
Posted by Jinsy at 03:29 No comments: 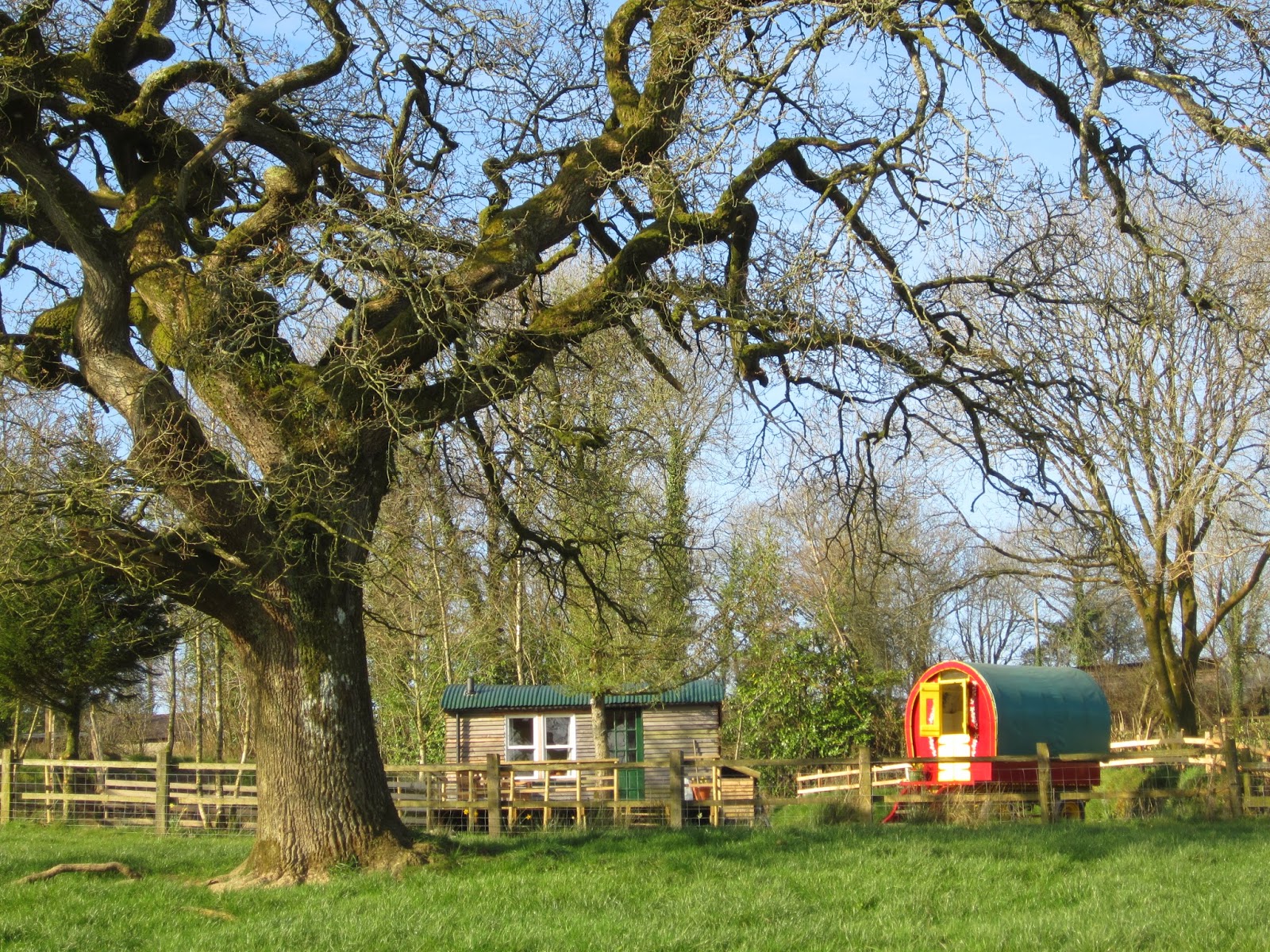 The first guests in the gypsy wagon have been here for the weekend and its been gorgeous weather for them. We have had several days of lovely sunshine that is reasonably warm and it has cheered everyone up.

Last week we met up with the boys from the high school in Cardiff who visit the farm on a fairly regular basis in Carmarthen. The Farmer had a calf to sell & the mart day coincided with the boy's visit so as something different for them we suggested they come to the mart. They were fascinated by the whole thing...the atmosphere,the noise, the speed of the auctioneers selling patter & the calves & dairy cows being unloaded from trailers inot pens before going into the seling rings. It is unlike anything else they would have seen and gave another insight into what farming & food production involves.

On Friday evening the Farmer & I had a real treat. We went to Rhosygilwen, a country house in Pembrokeshire that hosts world class music making of all kinds in a beautiful purpose built concert hall (www.rhosygilwen.co.uk.)
We went to see the acclaimed Russian painist Nikolai Demidenko (www.demidenko.net) play a programme of Russian music including Glinka, Rachmaninov & ending with a dazzling performance of Mussorsky's 'Pictures in an Exhibition'. It was wonderful evening in the lovely Oak Hall with an audience who were so appreciative of having such a renowned musician come to west Wales. We were given the added bonus of three encores. It is a very intimate venue and the audience was probably less that 100 people but was truly special evening. There really is nothing like live music.

After that cultural interlude the routine of lambing continues going well. We are only lambing about 40 ewes this year and are now about 2/3 through them. With the sunny weather rrecently it has been great to put the ewes & their babies out in large field knowing that they will be content lying in the susnshine without risk of miserable rain

Our first lambs arrived this morning so spring has definitely sprung. I also found masses of frog spawn in one of the ponds & I'm sure the other ponds will be similarly occupied by mating frogs. With the improvement in the weather the daffodils are suddenly appearing everywhere, the birds are singing merrily and everyone has cheered up.
We still have mud everywhere of course & the fields are still sodden and inaccessible but there is hope of better things to come despite mutterings from old farmers of snow... 'of course in 1947 the snow didn't come until March and stayed until June' is the last Cassandra-like murmur that I heard this week.
We will see.
Posted by Jinsy at 01:34 No comments:

Saturday was St. David's Day & we had daffodils in flower which is a good sign that spring is certainly on its way. The blackbirds are singing and we are due to start lambing any moment.

We went to our local market town Newcastle Emlyn, yesterday to a new film festival (www.atticplayers.org.uk/film-festival) that was launched at the weekend. Apart from the opportunity to see some short films made by local film makers, the film that I produced last year about the Teifi Valley was also being shown
(go to www.teifivalleyholidays.co.uk for details).
We saw some very good & interesting films on a varied range of subjects from goats to motherhood and home to the Dragon Festival that used to be held in Newcastle Emlyn and a series of music videos made by a talented young musician from the area, Rye Millican (www.youtube.com/user/RyeMilligan). It was pleasant way to spend a wet Sunday afternoon, in the company of friends supporting our tiny little local theatre.