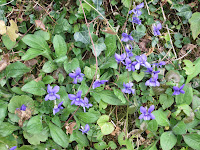 I found the first violets yesterday and the hedgebanks are begiining to look more spring-like each day. The hedges themselves are slower in that the quickthorn, blackthorn & hawthorn are only just beginning to show glimpses of green. We had one glorious warm shining day on Saturday when we were all out working in the various gardens on the place, though the Farmer was up on a roof fixing tiles most of the time which he said afforded him a splendid view of the toiling gardeners below.

Over the weekend when the weather was so lovely I had a group of Americans staying in the cottage. They were from Colorado where snow had been falling for three days just before they left last week, so Wales in the sunshine was great for them. They went down to Pembrokeshire to walk Dinas Head & could not have seen it  under better conditions.
Dinas Head is a small promontory between Newport & Fishguard and makes a wonderful circular walk of about 2 hours along the cliff path. The walk passes through the tiny hamlet of Cwm yr Eglwys where the remains of a 12th century church can be seen. The church  was washed away in huge storm in 1859 as well  as a large number of fishing boats. Apparently a storm of almost equal severity hit that coast in the mid-1970's. We have only ever seen it on beautiful clear calm days and it is hard to imagine just how fierce & frightening the storms must have been.

I have been harvesting the first 'wild foods' , wild garlic leaves, ground elder & chickweed, all of which make delicious additons to salads as well as being very nutritious, full of vitamins. Having had a long season of winter salads of cabbage, kale & leeks from the poy-tunnel it is lovely to have fresh outdorr green stuff, though the produce from the poly-tunnel has been wonderful to have through the winter.
The wild garlic or ramsons grow vigourously and have lovely heads of white starry flowers but the leaves add a fine gentle flavour to green salad. Ground elder is an invasive weed of positively Napoleonic ambition and almost impossible to eradicate so we've just learned to live with it and eating does at least make it useful & the flowers are quite attractive though I do spend a lot of time in the summer removing them in the vain hope that by not going to seed the plant will weaken...it doesn't but it makes me feel better! Chickweed is odd little low-growing herb with insignificant flowers but a very delicate & interesting flavour that makes it a good addition to salad dishes.
So, lunch today is a quiche made with organic shiitake mushrooms (www.maesymush.co.uk) & home grown leeks accompanied by foraged green salad with a hemp oil dressing & organic sourdough bread from our friends at Mair's Bakehouse (www.mairsbakehouse.co.uk). I can't wait...but I'd better go & make the quiche!! 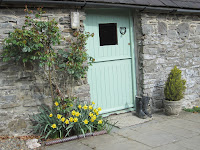 Hip, hip hooray, calloo callay, the swallows have arrived at last! They are a week or so later than usual but then the weather has been so cold that one can hardly blame them for not rushing back. The Farmer & I saw our first swallow yesterday evening at Mwnt beach near Cardigan, and then this morning the Farmer reported that he had seen a couple winging around the yard, so spring has definitely arrived.

With a few days without people staying in the cottage I have been attending to the running repairs necessary after three weeks occupation by families with young children. The paint work suffers dreadfully so I have been rubbing down with sand-paper and touching up the patches of flaked & chipped paint work in the bathroom  & entrance hall. Yesterday the weather was perfect for painting and leaving the doors open to allow warm spring air to circulate. Today it is a very different picture, cold, windy & wet & certainly not conducive to spring-cleaning of any kind.

The garden has suffered badly in the last few weeks with the bitter cold. I have found that two large extremely vigourous rosemary bushes have been blasted by the east wind and are now brown crisp ghosts of  their former selves and the big strong hydrangeas have had their new buds killed off. I think the hydrangeas will recover but I'm not so sure about the rosemarys. The daffodils are flowering well though for many days they looked as though they were hunching their shoulders against the cold and they are now taking a battering by the rain & wind.

On the farm the cows have gone out to grass but are still needing to be fed silage and so they are still coming in at night. The lambs are all doing well and can be seen gambolling around the fields or when the sun shines lying stretched out sound asleep beside their vast woolly mothers.

We have finished lambing, the sun is shining & the lambs are skipping aboutjust as they should be. The weather is lovely though still very cold and there is a firece little wind most of the time but with sunshine and blue skies who's complaining? Though from a farming pouint of view we do rather desperately need some rain now to get the grass growing...warm rain for a couple of days and tthe grass will get going. Fodder is becoming a serious problem for many farmers at the moment, they are running short and it is expensive to buy in.
Our cows went out the other day but it really was too cold and they were queuing up to come back in by lunch-time, however they are getting taste of what little grass we have at the moment which is already making a difference to the taste of the milk. From now on willl just get better & better, spring milk is always lovely.

Today the Farmer & I returned from  our second trip to mid-Wales this week to collect the digger tracks we had taken for repair at the weekend. This time we made a 'mini-break' of it and after stopping off in Machynlleth to visit a particular bookshop, spent last night in a delightful B & B about 3 miles out of Machynlleth.
www.dolgelynenfarmhouse.co.uk.  Dolgelynen was a lovely old slate-built farmhouse at the end of a mile-long track that ran alongside the river Dyfi. The views across  the river & of the ring of snow covered mountains behind the little town of Machynlleth were superb.
As we made our way along the drive we came across a white pony standing in the middle of the track. At first it refused to move but then decided to lead us on our way at a steady trot weaving to & fro across the track so we were unable to pass it. It lead us all way to the farmhouse where we learned that it was 35 years old, a family pet who was allowed to roam at will  around the farm. It was a comical introduction to an excellent place to stay.
The farmhouse was beautiful with low beamed ceilings and deep inglenook fireplaces. It was furnished with fine old traditional Welsh oak furniture, dressers with rows of pewter chargers, lustre jugs & highly polished copper ewers & kettles. We had such a warm welcome & would certainly recommend it to anyone visiting that area of mid-Wales.
We collected the digger tracks and once again drove through countryside still in the grips of much snow. There was a little less than we had seen on Saturday but still a lot blanketing the mountains and piled along the roadsides.