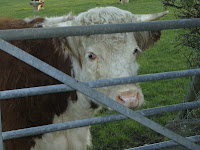 Yesterday, a day of wonderful glittering frost, the Farmer & I delivered a Hereford bull that we have bred to his new owners. He is a very handsome gentleman and should join his new wives without any problem. We had to take him down to a farm in the south of the county in the Gwendraeth valley, a part of Carmarthenshire that we had not been to before and of course we got lost, but a friendly postman we encountered on a tiny lane put us in the right direction and eventually we found the farm down a long bumpy track.
Having unloaded the bull from the trailer the Farmer then bought 10 laying hens from the farmer and they were ensconced in a poultry crate in the trailer for the journey home. We bought 5 brown Warrens and 5 lovely grey speckledy hens. They were all ex-battery hens so are now going to have a lovely life of space and freedom in the orchard with our other hens.
We made our way home via an excellent apple tree nursery near Llandeilo and purchased 6 new apple trees, 2 eaters & 4 cider varieties to be planted in the old orchard where we have lost some very old trees during the storms of last week.
Posted by Jinsy at 09:39 No comments:

After a dark & stormy night we have the added treat of a dark & stormy day! I have just walked the dogs through a tempest...I think the dampness seeping through my ankle-length, caped mackintosh obliterates any sense of exhilaration & of being at one with the elements.
The wild night has done for one of our 100+ year old apple-trees and it is now lying on its side in the old orchard looking very sad. The Farmer is now saying that he thinks we should fell the remaining three others before they too fall & possibly damage other newer trees in the vicinity.
The picture (taken on a better day!) shows one of our many, many ash trees which it seems are all doomed like the apples. The ash disease that has been in the news so much lately has apparently been found in a wood in Carmarthenshire so it is probably only a matter of time before the spores of the fungi that cause the damage are blown in our direction. The fungi known as chalara is wind borne so control is almost impossible. However, some trees are thought to have a genetic resistance. The disease was first found in Poland in the mid 1990's but is known to have been introduced here only in February 2012 with the importing of ash saplings from Holland. For more information go to www.forestry.gov.uk/chalara.

1.30pm.  Elder Son has just come to say that the chicken house has been blown over,( & its a very heavy chicken house!)one of the poly-tunnels is threatening to lose its plastic & the roof on one of the sheds is beginning to flap. The Farmer has gone out now to attend to the poly-tunnel before it blows away! An ivy-clad tree outside the office window hads come down during the morning, fortunately falling onto the lawn not onto the house. Such winds we have not had for a long time!
Younger Son has been called out to help remove fallen trees from a main road near Aberaeron. All very dramatic! And the rain keeps on lashing , we have small rivers running down the yard and the drains are bubbling over and there is a very pretty waterfall down a set of steps from the field behind the house!

Another Visit by City Boys & how They Made a Bread-Board.

Yesterday we had a second visit by a group of children from a high school in Cardiff. A very happy & successful day.
On their arrival the Farmer took them across the fields & down into the woodlands that lie on the northern boundary of the farm. there they watched while he felled a tree and then helped him to attach chains to it from the winch & tractor which were already down there and then pull it out of the undergrowth and onto the track. On getting the tree up to the yard it was then loaded onto the big sawmill and planked.
The boys, & one girl, were then were able to go through the whole process of seeing a tree become useable planks and by the end of the day they had each made a bread-board to take home. They even burned their names onto the boards with a hot skewer. They were all so happy & proud of what they had made...it was probably the first time they had experienced the pleasure of making something from scratch. (Unfortuately I have mislaid my camera, so no picture of grinning proud children & their day's work.)
Having seen how wood is harvested on their next visit they are going to be helping the Farmer plant trees which again will something totally new to them.
I think what we are giving these children is very important & their wonderful teacher has reported back to me that it was a superb day & may even have life-changing effects. I hope so, these boys need positive experiences so badly.
Posted by Jinsy at 01:57 No comments:

An update on the state of things in storm-wracked New Jersey. A friend from California wrote the following to me & I thought I would just pass it on as the effects of Sandy seem to have dropped out of our news reports and it was not only Manhatten Island that was so badly hit.

'I just thought I would write to let you know that tomorrow I am being deployed to New Jersey with a Disaster Response strike team to help in the recovery efforts. I am the second team going in from our organization and will relieve the first team who have been there for about 10 days. Each team has a 7-10 day deployment, after which they have at least a couple of weeks off before going in again if necessary.


Our base is in a town called Roselle which is slightly north west of Staten Island. We will work mostly on Staten Island which was badly affected by last week's storms, and still has had little rescue relief purely due to the fact that there is so much to do and so few responders. Staten Island has the highest storm-related death rate and many are still missing, presumed drowned. In actual fact thousands of responders have gone to help but there is just too much damage and progress is slow due to the high extent of damage to so many homes and flood waters are still hampering efforts to bring towns back to normal. Many people are in shelters or staying with their neighbors.

Our base has no power but is running on a generator. It is freezing cold on the east coast at this time of year and another storm is heading their way which is predicted to hit tomorrow or Thursday. It will bring more rain and even snow this time but won't be as strong as the first storm. I have to make sure I fly in before the next storm front closes the airports again! I have all of my thermals and winter rescue gear so I will be warm enough and even though our team will be sleeping in sleeping bags on a cold hard floor - at least we will be dry and have a roof over our heads and homes to return to!!

Some of our work will be rescuing those that need it and feeding people that are homeless. Other work will be counseling the victims and other emergency responders that have been traumatized by the disaster. Many of the local emergency responders have been on duty non stop since the storm hit, purely because their routes home are still blocked and therefore their local replacements/shift mates' routes to get to work are also blocked. No one gets in and no one gets out of some places still. Many homes are badly damaged but the work is so plentiful that local handy men are struggling to keep up!
One dear lady I know of still has huge tree that fell on to her roof, causing a big hole in the roof and lots of damage. She is huddled in one end of the house because she has no where to go but no one has been able to get to her yet to remove the tree because her situation just is not as urgent as others in her area. So there she is, with a new storm front coming in and a hole in her roof with no way to fix it in time to prevent new rains and snows from flooding her house. From what I gather she has no family close by and recently lost her husband!! Just one of hundreds of similar stories!  Anyway, that is what I will be doing and this is where I will be for the next 10 days or so.'
Posted by Jinsy at 08:58 No comments: