Too Early for Spring, Death of a Peahen, Delicious Turkey & Happy Christmas Visitors

Well, here we are at the very end of the old year and with such mild weather in stark contrast to what we were enduring this time 12 months ago. It is so mild that the birds are singing and in the garden yesterday I found narcissus in full flower & a couple of of very frail looking primroses! Daffodil shoots have been visible for a couple of weeks now & I have seen snowdrop shoots in the hedge banks for a month or more.
The holly trees are still covered in berries...is that portent of a hard winter yet to come?! 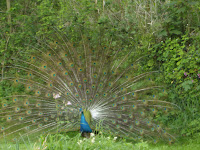 Tragedy struck last night in the form of the 'gentleman with sandy whiskers' who took a fancy to our sweet peahen and she is no more! Over the last few weeks the Farmer has been feeding the peacocks outside the kitchen window and they had become quite tame and appeared regularly at breakfast time for their daily morsels of bread or cold potatoes. I hope Charlie Peacock won't now go into a decline & pine away with loss of wife number 2.


Christmas came & went very quietly in our household. We had one of our home-reared turkeys which was quite delicious though far too big to fit in the oven! The Farmer decided to bone it  and then rolled it up with stuffing & sausagemeat and it then fitted perfectly. Boning a bird in that way is great, it means there is no fiddling around carving the bird & every scrap is eaten. ( The Famer & Younger Son did talk about putting a woodcock in a pheasant in the turkey, but we left it too late to gather the necessary birds. Another time we will definitely try that rather medieval way of cooking a fine roast bird.)
The presence of our 11month old grand-daughter was lovely. At that age all she is interested in is the wrapping paper which was was very sweet to see.
Our guests in the cottage over the Christmas weekend kept themselves to themselves & said they had had a very happy time just being on their own and thought the cottage was perfect for their Christmas holiday & I must admit it did look lovely with the Christmas tree lit up and a roaring fire when they arrived.
Posted by Jinsy at 03:30 No comments:

With the huge number of films being shown on television at this time of year I find myself wondering how many people will catch a film that was made here at Penyrallt Home Farm in 1993 starring James Coburn & Edward Woodward. It was called 'Tan Ar Y Comin/ Fire On The Common''  or 'A Christmas Reunion'. It is shown every Christmas on at least one of the many channels that are now available, though as we don't have tv ourselves we never get to see it & unfortunately it is not available on dvd (we do have a very old video copy that is in poor condition but no video player these days).
We spent the summer of 1993 hosting the film crew & having our house taken over as a set both for interior & exterior shots. It was great fun and we met a lot of great people. As well as having Edward Woodward here for some of the time, the director David Hemmings was here as he was working in conjunction with Carol Byrne-Jones who was directing the Welsh version of the film. They worked together filming 'back-to-back' which meant every scene was filmed in English & in Welsh.
We all had great fun, with the Farmer & the Sons (who were very young at the time) all taking part as 'supporting artists' or extras. Even our dogs, poultry & cattle were roped in & our house & buildings were used from all sorts of angles and looked wonderful.
The script was based on a book by the Welsh children's author, the late T. Llew Jones who was born just down the road from the farm. He remembered coming up here to play as a child so the idea that his story should be filmed here was rather fitting. The story centres around an orphaned gypsy boy who inherits mare & her foal on the death of his grandfather, but then learns that he is the illegitimate heir to the local squire (Edward Woodward). Much trouble ensues but with a happy outcome, of course.
The Welsh version is set entirely in Wales but the English version has scenes set in Boston which is where James Coburn comes in playing Father Christmas(!). You'll just have to try and see the film!
Despite these oddities, it is good film for family viewing and has a definite Christmassy flavour.
Posted by Jinsy at 09:18 5 comments:

Today is turkey killing day! Sorry to be so blunt about it but it is the reality of rearing table birds. At least we can say with all honesty that they have had very happy lives wandering around the farm foraging for beetles & worms as well as having an ever full hopper of pelleted turkey food, which is a world away from the lives of the poor creatures produced in intensive poutry units by the thousand.
(I saw a very funny card the other day with  a picture of a beautiful bronze turkey in fulll display mode with placard round its neck saying 'Eat Ham'!!!)
I will quite miss them being around the place with their strange turkey-talk being audible all over the farm, though they have completely shredded my geraniums and various other plants in pots that are struggling through the wintery weather.
The Farmer has taken the plucking machine down to the slaughter area and he & the Sons will get the job done cleanly, quickly & efficiently. The turkeys will then be stored in the cold-room until they are collected or delivered to their final destinations, the ovens of family, friends & neighbours. The Farmer says they will be killing out at about 12lbs + which is reasonable size I think, not too big but large enough for several meals...or enough for everyone to get heartily sick of turkey curry & turkey sandwiches, which personally I adore!
Posted by Jinsy at 02:02 No comments:

Rain, sleet & hail but no snow! Everything is grey, damp & sticky...we need some real cold with frost and snow to cheer the landscape up!

Yesterday the Farmer went into a local primary school at the request of one of the teachers to talk to her class of 9-10 yr olds about farming and food production. He went armed with large photos of our cattle & sheep, a great bag containing a fleece & carders & some samples of hay, silage & manure(!). Apparently the children were great, really interested & knowledgeable and to the Farmer's surprise the conversation covered not just farming but vegetarainism, food imports, hunting & vermin control. He was impressed by the standard of questions asked and the comments of the children on the various subjects.
He was encouraging the teachers to bring the class out to farm next May to witness shearing and to then visit the National Wool Museum which is wonderful and only five minutes down the road from the farm. I hope they do arrange such a day; we would certainly enjoy it as much as the children.
Posted by Jinsy at 04:04 No comments:

Yesterday, in the pouring rain, we hosted an apple-tree pruning course. The instructor was one of the gardeners from the Centre for Alternative Technology at Machynlleth and she was very knowledgable and came equipped with pruning knives & a lot of information.
8 people came along to learn this useful skill as well as ourselves (though I spent most of my time doing the catering as per usual!) and despite the hideous weather it was a very enjoyable day. It is always a good sign when people sit over cups of tea & cake in the warm kitchen after being out in the cold rain, for a couple of hours chatting.

We have a large number of fruit trees here on the farm in two orchards so were able to have a variety of trees to look at. The old smaller orchard has trees that are anything from 100 to 150 years old while the new orchard has about 30 trees that were planted 12 years ago. As well as apples we have pears & plums, a couple of cherry trees & a very young mulberry tree.
Posted by Jinsy at 02:29 No comments:

At last after almost three weeks of having no vehicle the Farmer & I can now get out and about in our lovely new (to us!) Daihatsu Fourtrak. We have been very fortunate in finding this 4x4...it is ten years old but with very low mileage (only 46000!)  and in near perfect condition & at a very reasonable price. Let me dispel the myth that all farmers drive around in new Discoverys or similarly expensive vehicles. Most of our farming acquaintances have terrible tatty pick-ups or down-at-heel saloons that do everything from carting bags of feed & wet dogs to getting the wife to town, which of course is just what our vehicle does, though while it is is still in its shiny polished show-room state I am very loathe to allow muddy boots & filthy dogs anywhere near it. I am sure however that by the end of the week it will be getting that well-used farm vehicle look despite my best intentions...after all it  a work-horse and has to be utilitarian and just going up and down our drive it is already spattered with a fine coating of mud.

Well, we are on the run up to Christmas and I already have 3 Christmas cards on the dresser, two of which arrived in the third week of November which really is a bit too soon.

The turkeys are doing well. We had 20 but are now down to 18 thanks to the over-enthusiasm of Molly the sheepdog. They spend much of their days roaming freely around the farm and can be found chattering gently to each other in sunny corners. They are so ugly but quite entertaining to watch with their need for company and constant reassurance that they are all within in sight of each other.


The Farmer, Younger Son & labradors have gone off beating again today. A nice dry day for it and the sun is trying to glimmer through the cloud. They will all come back tired, muddy & with a brace of pheasant apiece which will hang for the best part of a week before I have to do something delectable with them. Iam getting through the range of cooking methods, roasting, casseroling, braising & I think I shall try making a type of terrine with some of the meat, also game pie always goes down well.
I spent the morning making large quantities of mince-pies which I shall freeze for a couple of weeks to be brought out nearer Christmas & I must get on with making marzipan for the Christmas cakes and various special sweetmeats (nice old-fashioned phrase) to be given as presents in pretty tins & boxes.
Posted by Jinsy at 06:20 No comments: