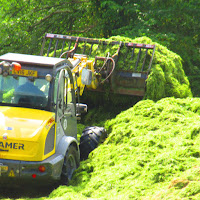 A month since my last post and what a busy month it has been. We've seen our younger son married, had all the family to stay, made silage, had the decorators in, done lots of bee-keeping, had several holiday-cottage changeovers, sheared the sheep and all with the aid of glorious weather. Now that the rush of activity is over the weather has turned and we are now enduring cold wet and windy conditions.

Younger Son's wedding went off without a hitch on a beautiful May afternoon in a lovely sunken garden,(a former slurry pit!) at a local 'wedding venue' only a couple of miles from home. It was a very pretty country wedding with lots of flowers decorating the wonderful oaken pavilion where the ceremony was held and along the walk up through a meadow to a garlanded arch leading to a vast triple tipi for the reception.The tipi had been beautifully decorated with flowers and bunting and was very pretty. Flowers were dispalyed in milk churns and old glass milk bottles and the wedding favours for guests were tiny jars of honey from our bees, which everyone thought was a lovely touch. The tipi held the 120 guests easily with plenty of space for the evening guests as well which brought the numbers up to about 200. It was a wonderful day, everyone very happy and a great mix of people from farmers (the groom) to pharmacists (the bride) and all professions in between. Guests had come from all over the country, Yorkshire, Herefordshire, Dorset, Cambridgeshire, Nottingham, London and even Ireland, which was wonderful as west Wales is a long way from almost everywhere! There was also a goodly number of local friends and everyone had great time. (www.welshgreenweddings.co.uk) 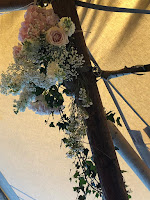 May has been a busy month for the Farmer and his bees. He has had five swarms and with collecting boxes out around the neighbourhood and beyond is hoping for more. The most difficult one lodged itself in between some silage bales and the past few days has seen the Farmer trying his best to encourage them into a hive but with little success so far. Honey has already been extracted and which is very early and it looks as though it is going to be good season. 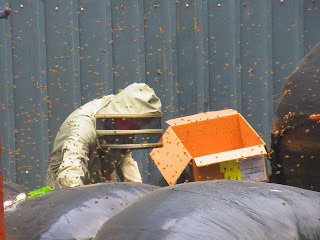 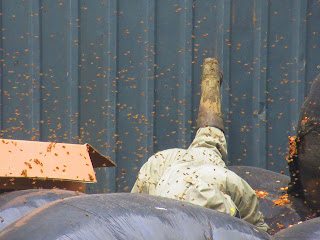 Silage was done the week after the wedding despite Younger Son having gone away on a short honeymoon. It was one of the earliest cuts we have ever taken and with the rain that we have had over the last few days there will be a good second crop before too long.

The countryside is looking wonderful as always at this time of year. The hedgerows are full of flowers and many of our hedges have tall elegant laburnum trees which are all their glory of hanging golden tresses. It has been a magnificent year for the May blossom, the trees thick with flowers like clotted cream and the bluebells have been astounding in their blue-ness. We recently drove past an ancient oak woodland spreading for a couple of miles and the whole way there was a thick ocean of intense madonna blue such as I have not seen before, a truly wondrous sight.
The birds are never quiet with the squabbling sparrows in the hedges & the chittering of the aerobatic swallows as they harvest the flying insects to feed their broods in the eaves of the house. Sadly this year the house martins have not returned after their first sojourn here in over 30 years last summer but the swifts are back. We have been fortunate to have nuthatches nest in a crevice in the stonework of one of our buildings and have been watching them returning to feed their young who bravely poke their heads out to watch for their meal arriving. In another building which has a row of pigeon holes, there is family of jackdaws have taken up residence and again there is always frantic noise from the hatchlings when they realise their parents have returned home. 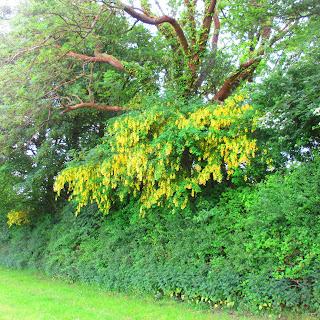 It is very touching when we have visitors who came as children to the holiday cottage returning after many years with their own children. Their memories of childhood holidays spent here are so vivid and apparently important that they wish their offspring to experience what they had. We must be getting something right. Very often the fondest memories are of the dogs and watching the cows being milked. Of course when it has been a gap of over ten years the dogs will have changed but the new ones are just as friendly and endearing as those remembered and are quite happy to be petted and fussed over as much their predecessors to the delight of the children.
Happy children = happy parents = happy holidays = happy memories.