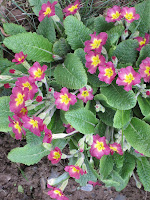 Glorious weather & the spring flowers are in abundance. Primroses in the hedgebanks, polyanthus & narcissus in the garden along the drive & I have just found the first bluebells in flower in a sheltered corner of the yard. The birds are singing joyfully from the crack of dawn and walking the dogs first thing in the mornings I hear  blackbirds, thrushes & wood pigeons, with woodpeckers hammering away up the wooded valley & canada geese coming in with their refrain of the wilderness.

This morning the Farmer & I had to go to Lampeter and on our way back went through the very entertaining excercise of trying to find a molly lamb to adopt onto one of our ewes who had lost her own lamb. Our good shepherd efforts meant driving along and me saying at intervals ' Look, there's a farm with lots of sheep & little lambs. Where's the farm entrance?' The Farmer then swinging the car down the next farm track and we arrive in an deserted yard with a farmhouse that delightfully, has not been renovated to a standard pattern of modernity, to be greeted by a welcoming committee of rangy sheepdogs & snapping terriers. A shadowy face peers out of a kitchen window and then disappears. The Farmer goes to the kitchen door and calls in, 'Bore da! Anyone home?'.  After a while a very little old Welsh lady in a proper old-fashioned floral pinny appears & the Farmer in his best Welsh explains what we looking for. She smiles and becomes very chatty, wanting to know where we lived and who we were. Once her natural curiosity is satisfied she returns to the request for a lamb. 'Nah, sori. We have rented out the farm now and they are not our sheep. Sori. Bore da.' And so we leave the yard escorted by the snapping terriers. We drive on for a few more miles until I spot another field of lambs jumping about in the sunshine and we wend our way up another twisting lane to a modern bungalow with lots of sheds where once again the Farmer approaches the back door. This time we are in luck and the owner of the dancing lambs just happens to have a couple of orphans and is more than happy to sell us one for a very modest sum. So we leave with a beautiful strong ram lamb in the foot-well of the passenger seat where I earnestly hope it won't relieve itself before we get home. (It doesn't!).
The reason for this somewhat random way of finding a replacement lamb is that our neighbours had none for us. Years ago there used to be what was called the Lamb Bank & one could call a certain phone number (possibly it was the NFU that organised it) and be told where lambs were available or log that you had some to spare. Somehow this arrangement has unfortunately ceased, more's the pity. It was very effective & useful.
Posted by Jinsy at 08:59 No comments: 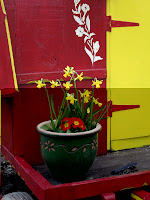 At last I am able to show some photos of the interior of the delightful gypsy wagon & cabin that are now available for holidays here on the farm.
It has beeen a long project but now the caravan/wagon  is finished & so is the cabin that is adjacent to it where guests will find a very comfortable sitting-room with wood-burning stove, fully equipped kitchen & shower-room.

The wagon iteslf which is a traditional bow-top has a double bed and plenty of storage space and is all tricked out with lovely floral chintz linings and ticking stripe cushions.
The cabin is in tasteful neutral shades again with chintz & ticking fabrics to echo the look in the caravan. The sofa & the wood-burning stove ensure a comfortable place to sit once it is too chilly to sit out the veranda gazing at the stunning views & there is a well stocked set of bookshelves including a selection of dvds.
All in all it is a lovely place to try a bit of posh camping.
Go to http://www.oldoakgypsywagon.co.uk/   for further details, availabilty & booking. 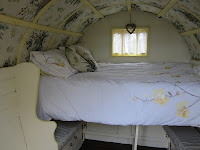 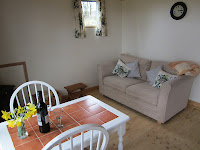 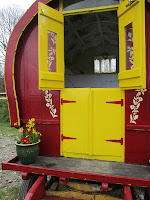 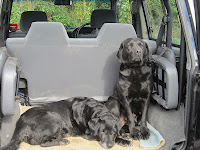 Our two black labs, Poppy & Hattie were caught sitting hopefully in the back of the car longing for trip with men & guns...they do not understand that the season is over  and that a car door left open is not an invitiation to them for a jolly day out. They took a lot of persuading to get out!

We have a had a couple of days of large lorries coming & going. Yesterday we were given a vast quantity of soil from a an excavation site in a local village. The lorries were coming onto the yard about every 3/4s of an hour until 6pm.
The soil will be very useful to us as back-fill on a large new pond that was dug last year and is still needing to be finished off. Once the soil is in place & carefully landscaped we will undertake a tree-planting session around the pond.
Today Younger Son returned after a very successful day at Cheltenham for the Gold Cup yesterday to go. On his return he went to get a big lorry with low-loader to transport his 13ton  digger to a job some miles away. The farm has been echoing to the squeal & hiss of air-brakes & the revving of very powerful engines of a horse-power that is frightening. Fortunately these things only happen very occasionally but the menfolk do love it!

I had a lamb in the kitchen yesterday, the first time for ages. It was healty creature but was twin with a much stronger brother who monopolised the milk bar, so the little scrap need some help. However, fortunately another ewed lambed and we have been able to adopt the one onto her with very little trouble. I don't mind feeding lambs but I really don't like having them in the kitchen for any length of time, mainly because they piddle copiously & if they are well but hungry they are difficult to keep contained & trot about the place bleating for company & food...so the sooner we can find a surrogate mother the better.

Water Cheaper Than Milk... An Outrage!, The Countryside Restoration Trust

A friend has just sent me the following;
Sheila Dillon of the Food Programme tweeted this yesterday: "...dairy farmers in the UK v hard pressed by processors in collusion with big retailers--and us! Milk cheaper than bottled water. Crazy".

Why do people buy water? Bottled water is the biggest con ever & that it is cheaper than milk produced by people like us after long hours of hard work in frequently appalling weather (it is not just the milking of the cows, you know, but the feeding & cleaning & bedding down & harvesting of feed for the long wet winters!) is offensive & outrageous.
Do not buy water...but do buy lovely healthful milk, especially organic milk!!!
Rant over!...well almost.

In this month's copy of The Field (http://www.thefield.co.uk/) there is a marvellous piece by that champion of the countryside Robin Page. He is saying rightly that farmers & farm workers are now an endangered species and that the 'armlock' of the supermarkets must be broken in order that farming incomes can be improved to encourage young Britons to work on the land. Why are growers of fine British produce paying duty on fuel when imported & inferior food stuffs are coming into the country on tax-free fuel? Also there should be policy of local food  procurement for the Civil Service, hospitals, schools, prisons & the military.
Another very valid point he makes is that those entering a career as 'conservationists' (or even tv countyrside presenters) should work for six months on an upland farm & six months assisting a gamekeeper.
The title of the this piece is 'If I ruled the World...'  a regular feature in the magazine & this one by Robin Page is one the best we've read. So  much sense spoken by the man who is the founder & chairman of The Countryside Restoration Trust http://www.countrysiderestorationtrust.com/.
Posted by Jinsy at 03:31 No comments:

A beautiful , smiling sunny morning with a light haze over the valley & blue skies...perfect weather for lambs. We are in the middle of lambing & are having a goodly number healthy of twins  & good strong singles. If this fine weather continues they will be out either in the orchard when they are just a day or so old or in the fields once they are several days old.


Yesterday the Farmer & I went over the National Wool Museum (http://www.nationalmuseumofwales.gov.uk/) which is in Drefach Velindre, about 5 minutes away from us, to an Eco-fair. Many of our friends from the local Energy & Housing Group & the Teifi Food Circle (http://www.teifitransition.org.uk/) were there and it was good to catch-up with so many of them. The socialising aside, the event was very good with a  Seed Swap stand where people brought along saved seed of fruit & vegetables & swapped them for other types & varieties. If you did not have seeds to swap you could put whatever seeeds you desired in the small envelopes provided and put a donation in a jar. It was very popular. We came away with seeds for tomatoes, a black radish, which appparently  has to be planted after the summer solstice and crops in the autumn & is used like swede or turnip & cucumbers & beans.

Last weekend we had some friends come over to demonstrate how to graft aple trees. We have some very old apples trees in one of the orchards. They are a good 150 yearsold and whilest they are still good croppers and healthy trees we thought it would be good idea to graft them onto some new rootstock. M. & her husband are setting up a forest garden about 10 miles away (http://www.theforestgarden.com/) and were keen to do some grafting from trees in an established orchard. The rootstock have now been planted in a safe place and we will wait to see how the grafts take & how the new trees do.
Posted by Jinsy at 03:15 No comments: