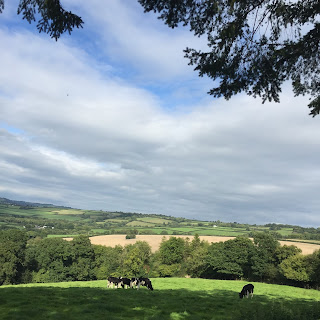 After a busy summer of house guests, holiday-makers in the cottage, family and farming things are returning to their more normal routine which is something of a relief. Not that we didn't thoroughly enjoy all our visitors who were very good company and gave us glimpses of city life beyond Penyrallt but when the daily round does not run quite as predictably as usual the dogs who are creatures of habit, get frustrated when their walks are later than normal and as a consequence their supper, and they fuss around or sulk in their kennels rolling their eyes at me in exasperation.
Our lovely guests meant that we made the effort to show off our beautiful countryside and we took trips down to Pembrokeshire to walk the coast path and have beach picnics with a soupcon of culture provided by a visit to St. David's cathedral which was as wonderful as ever.
In fact we visited St. David's twice in a week (which was no hardship) as we took the grandchildren away for a couple of days to a cottage near Fishguard and took them to the cathedral for the first time. H. aged six was very taken with the 'stone men', the effigies of knights and bishops that are such a feature of the cathedral. We were there on Bank Holiday Monday which is something we would normally avoid like the plague but it turned out to be a very good day for visiting with the children as the bell tower was open and they and the Farmer were able to go up the tower and see and hear the bells. The Farmer had been a bell-ringer in his youth and so was able to talk knowledgably to them about it all. The highlight of the days away with small people was the boat trip around Ramsey Island which took place on a day of flat seas and glorious sunshine...I had been dreading the possibility of having to cope with sea-sick children, but all was well... and we saw many heavily pregnant seals lounging hugely in tiny coves around the island. They are due to pup any time now. Ramsey Island is an RSPB reserve and we saw gannets, fulmers, gulls and terns. We have taken various of the boat trips over the years and they are always wonderful whether they are in steel hulled boats or inflatable RHIBs and going around Ramsey or further out to Grassholm to see the gannetry. On occasion we have seen risso dolphins, porpoise, minke whales, puffins, kittiwakes, and of course many seals and it always a thrill. 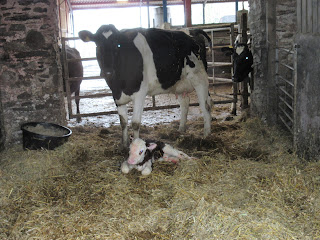 With the hint of autumn now in the air we have started calving and with 80 cows to calve Elder Son has called on a cousin to come to stay for a month to help out. She has come down from Herefordshire with two horses in tow which is lovely for the children as she will give them riding lessons while she is here when she is not busy feeding calves, checking the ladies-in-waiting (on horseback) and generally being useful. 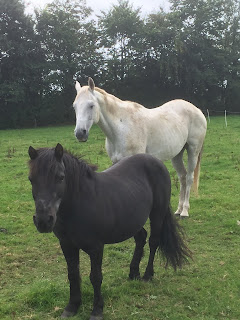