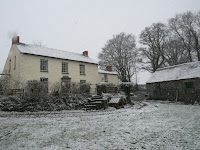 A snowy morning after several days of biting cold. At present the snow is not a problem as it just a dusting though it is falling quite steadily. If it continues and schools and roads may be closed farmers have to carry on whatever the weather throws at us and snow, while quite lovely to look at, casuses huge problems for farmers with livestock out in the fields and on the hills and for those of us with milk to be collected. As I have mentioned before we now have to take out insurance against non-collection as we are no longer allowed to use emergency milk tanks to take it out ourselves to meet up with the milk lorry on the main road if the lorry cannot get up our driveway.


Lambing has begun with two orphans who are being bottle-fed and hopefully they will not have too many companions as more ewes produce. Whilst bottle lambs are sweet and pathetic to start with they do become rather a nusiance and we always try to adopt them onto ewes who have only a single lamb and plenty of milk. 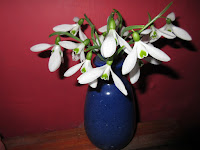 February and the snowdrops have been appearing in hidden corners and along the drive for a couple of weeks now, a sure and welcome sign that spring will soon be on its way, though it is now very cold again and at regular intervals throughout the day we have been pelted with heavy showers of hailstones.
Late December & January were very busy with family events and now that things are getting back to normal I am catching up with myself.
This month has been renamed Februdairy! 28 days of social media posts devoted to promoting a positive understanding of the dairy industry in the face of the current campaigns by certain anti-farming & anti-dairy groups. @februdairy on Twitter is buzzing with farmers all over the country posting images and text telling the story of dairy farming in the hope of correcting the gross mis-information that has been put out by the vegan community amongst others. One thing can be certain, farmers will not stoop to the level of certain individuals in abusing and insulting those who farm this land as has been demonstrated on Twitter with posts containg aggressive and hateful language directed at the farming industry as a whole, not just dairy farmers. We will always inform and hopefully educate in a polite & courteous manner without pandering to the lowest common denominator. 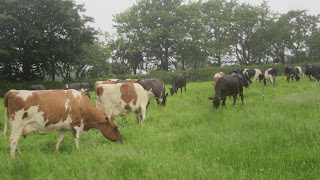 Work on the farm is as always at this time of year hard & busy with feeding and bedding down the cattle every day. The sheep are now in too ahead of lambing which is due to start in late March though a couple of ewes ahev pre-empted us by producing a lamb each which was a surprise indeed. It would seem that a ram lamb missed the 'snip' & got in amongst the ladies at a critical time and so we have a couple of very early lambkins.

When not doing the routine work much time is being spent removing the standings from the old milking parlour with a samll digger in the building drilling away with a pecker at the concrete block upstands. The room is coming back to its original look and there is lot of discussion on what it will be used for. The Farmer wants to make it into his brew room with all his apple-pressing and cider-making equipment installed there as well a place for extracting honey and storing the bee-keeping equipment, while Elder Son is talking about making more calf-pens of which we can never have too many. 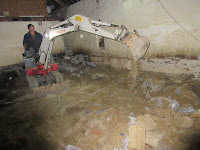 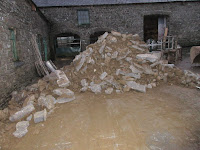 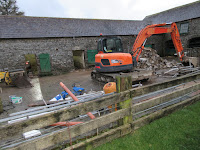