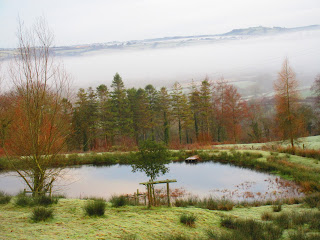 Here we are more than half way through January already and a beautiful frosty morning with the sun glimmering through the mist that veils the valley promising a fine day after several damp grey days that lower the spirits and increase the mud. However, to cheer the soul there are the first snowdrops nodding in the banks under the hedges and even some early daffodils are opening their green-sheathed heads to gleam golden in corners of the gardens and paddocks giving promise of the triumphant displays that we shall enjoy as the year progresses.

With the grandchildren having gone bcack to school the farm has settled back into its usual routine and everyone is busy each morning with the chores of feeding and bedding down the cattle before getting on with much needed jobs such as fencing and keeping up with the supply of firewood. In addition to these essential jobs the Farmer is finding time to build a shepherd's hut for our daughter-in-law who has has decided to replace her canvas-covered gypsy wagon for something that will give a longer letting season. The shepherd's hut will be delightful and alongside the cabin which contains a small kitchen/sitting-room and bathroom gives opportunity for a truly rustic retreat overlooking our beautiful valley(www.oldoakgypsywagon.co.uk).

Out in the wider world we have to endure the shambles that is Brexit. The majority of Britain's farmers voted to leave the EU and now we are going to face some of the biggest challenges to food production in this country since the second world war. Some politicians say that a no-deal Brexit will be a disaster for farming but appparently opinion is divided amongst those MPs with agricutural constituencies. Whatever the outcome of it all we farmers will just keep our heads down and carry on doing what we do best which is producing food in times of uncertainty, in other words carrying on as normal. After all we farmers are very adaptable to circumstances, whether it be being held hostage by the weather or squabbling politicians. 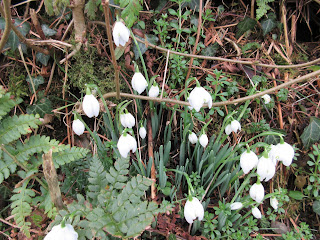