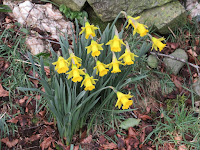 Yesterday was a day of clear blue skies and almost warm sunshine which made us feel spring was really on its way. Today we have lowering grey skies, vicious showers of cold rain being hurled at us by a bullying, blustrous wind...so spring has gone into hiding once more and the weather forecast is predicting bitter cold and possibly more snow for the east over the next few days, so we are back to where we were ten days ago.

Despite the return of grim weather the brave & jaunty daffodils are forging ahead with their jubilant colour enlivening everyone's spirits alongside some of the best displays of snowdrops that we have had for several years.
Each morning we hear the plaintive calls of the Canada geese as they make their way down the valley to the river and sometimes they land on one of our ponds where they spend a couple of hours majestically treading water before setting of once more on their flight path west. Trios of mallard also visit and sit quietly until something alarms them and they rise up off the water in a clamorous flurry to be seen wheeling off to another pond in the valley.

We are still just getting going with lambing with the bulk of the ewes due to start next week. We have a couple of lambs that are being bottle-fed but they have got the hang of it and so it is easy. Although ideally we would not have 'molly' lambs as they are called it is quite satisfying when they feed well and can be seen to be thriving. 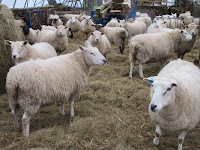 A few days ago the Farmer and I had a chance to go off for the day and so we took ourselves up into the empty hills above Tregaron and drove across a dramatic landscape still scattered with pockets of snow. On of the oddest sights up in hills is that of what must be one of the loneliest letter-boxes with its neighbouring derelict phone box in the country as seen below... 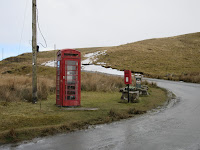 This part of the country is beautiful and even in the summer there are few people to be found up there. The only sounds to be heard are the bleating of the sheep, the mewing of the buzzards, the wind through the conifer plantations and the running water in the small streamm that feed into the Llyn Brianne reservoir. 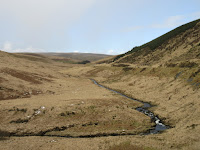 A grim note on society; earlier this week Elder Son was out checking fences in some of our outlying fields and came across a grisly find...a sheep's head, spine and rib cage along with a stinking bag containing the rotting remains of the skin and fleece. It was not one our sheep being a different breed, so must have been stolen out of a field elsewhere, slaughtered and then the two back legs taken presumably to eat, with the remains of the carcase being dummped in our field which is on the side of a quiet country lane. A criminal, disgusting act and with no chance of the perpetrators being caught and held to account. I suspect that this is something goes on more often than we would think but it is a shock when it occurs on one's own land.

After days of intense, biting cold and only a thin layer of snow we had 'proper' snow over the wekend thanks to a slight rise in temperature. Whilst the snow is beautiful to look at it and the grand-children were thrilled to able to use their sledges, it caused more problems in what had already been a very difficult week due to the Arctic conditions. In addition to having to thaw out water pipes & cattle troughs which all takes time the drive had to be scraped and spread with gravel in the hope of getting the milk tanker in. If the tanker cannot get here we would have had to dump the milk...a decision that is never taken lightly. We have an excellent drivers and they do their utmost to get to us and we do all we can to assist them despite not being allowed to tow the lorry (another stupid regulation. The lorries are not even fitted with tow-loops any longer). We certainly have not had the quantities of snow that other parts of the country have had to cope with and many dairy farms have had to dump their milk as the tankers have not been able to get throught snowdrifts but all snow & ice causes all farmers difficulties. Now we have the thaw and steadily falling cold rain with the attendant problems caused by the melt waters as well as the rainwater...back to mud everywhere once again.

Lambing is going well with the adoption of two orphan lambs onto ewes with only single lambs.This is usually a successful procedure with perseverence and patience on the part of the Farmer. It is a joyful sound of spring when I hear the lambs bleating in the large polytunnel that we use as a lambing shed and the mellow low tones of the ewes talking back to their offspring.