R is for Rain, Rest & Relaxing after Harvest 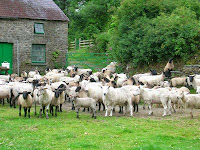 It is raining! 4.15pm on Thursday 26th June after what seems like endless weeks of sunshine the weather has broken and we can all take a deep sigh and relax having had an incredibly busy time literally making hay while the sun shines.
The Farmer & the Sons seem to have taken up full-time residence in their tractor cabs as they have been doing many hundreds of hours & acres getting in the silage crops around the neighbourhood as well as our own. After the mild spring the grass crop is superb for everyone and we have even been able to make hay as the weather has been so good for days on end.

On one of the few days when the Farmer was not required to drive a tractor he brought the sheep in for shearing.He did our small flock of about 50 ewes in one day on his own. It seems there an increased demand for organic wool this year which is very good news. We shall take our wool up the collection centre in Brecon before too long & hopefully will get a reasonable price for it.

Despite the pressure of silage making the Farmer & I were able (or should I say allowed!) to go away for two days last weekend to attend the wedding of the Farmer's god-son, in Devon. We had lovely time catching up with old friends. The wedding was great fun, very simple and informal. Someone described it as being like a mini festival, with really great live music playing and fire-jugglers, stilt walkers and a fire to sit round in the gloaming of the longest day in a field on the edge of Dartmoor. A very happy & enjoyable occasion.


On our return it was back into the fray with the Farmer immediately being summoned to drive again and take over the milking as required. Today he has been painting the tin of our curved-roof barn...he is up there quite safely I hasten to add... with a knapsack sprayer transforming what was a very shabby roof into a bright red-oxide coloured curve of corrugated tin which will last another ten years or so.

The soft rain which is now falling is much needed. The fields will now recover well and there will be a lovely growth of aftermath for the cows. The gardens were beginning to show signs of dehydration so they will perk up now and the dust will wash away from the borders and be well damped on the driveway and yard. While the sunshine is wonderful it does mean such hard work for farmers and so a few damp days now will mean they can have rest and catch-up on all the other tasks that get neglected while making the most of good weather. 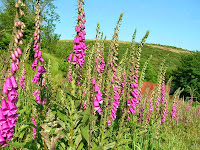 The first week of June and the foxgloves are coming out in their cathedral spire-like glory.
After the blaze of cerulean blue from the bluebells in the bottom of the hedges we are now lifting our eyes up to these gorgeous puce pinnacles as they fill up every corner of wild banks. They are particularly welcome on areas of disturbed ground such as the new bank behind the holiday cottage where they are giving an amazing display. Being primary colonisers they just appear in their masses with no effort on my part to create such a wonderful planting scheme!

At the weekend the Farmer & I attended the wedding of some friends which took place at the Ceridwen Centre (www.ceridwencentre.co.uk, www.welshgreenweddings.co.uk) a lovely wedding venue just ten minutes drive from the farm.
Our friends G. & R. had a perfect day (despite dire weather forecasts which fortunately proved to be very wrong)with sun shining and all their guest able to relax out of doors gazing at the stunning views across the valley.
The Ceridwen Centre has a very pretty little walled garden with a beautiful wooden structure, rather hobbit-y in appearance, for marriage ceremonies to take place in, however the registrar who it seems has the power to make such decsions said that because of the risk of rain the ceremony had to take place indoors. So we all trooped into what had been the old dairy in the days when the centre was working farm. It had of course been decorated in case of such an eventuality and was fine.
The bride came in with her father to Jimmy Durante singing 'Make Someone Happy' and then bride & groom exited to The Carpenters singing 'Top of the World'...all rather good fun & certainly original.
The bride is an expert on renovating old buildings (she is know as G...the Lime due to her encyclopaedic knowledge of the uses of lime mortar, putty, plaster etc.) and during the service the poem 'Scaffolding' by Seamus Heaney wholly apporiately, was read out. (Look it up.) The service ended with reading of a Welsh poem 'Dau berson ydych heddiw, Ag un bywyd yn eich blaen' (roughly translated as 'Two people here today At the start of their lives together'.
It was all very simple & unfussy and happy.
The wedding feast was held in the magnificent double tipi with beautiful flowers decorating each table and very good organic food & wines served.
The Farmer as well as being a wedding-guest was also part of the Entertainment with the band he plays in providing the music for some Welsh folk-dancing. The caller, who knows all there is to know about Welsh traditional dances and much else besides in the field of Welsh folk culture, has years of experience in getting people up to dance and they did so with great gusto. After an hour & a half (!) of Welsh dancing the band retired to great applause to make way for the disco...the dancers not being a whit worn out by their previous exertions continued to bop away the night to 70's disco classics.
Posted by Jinsy at 02:28 No comments: