I recieved this message from a Polish friend yesterday & I think it hightlights many of the problems that face family farms throughout the world, not just in Europe thanks to government & corporate greed.
If anyone can be in London tomorrow to support it then please do.

Here is the Press Release (in English and Polish) which accompanies our Polish Embassy protest at 2:30 on 20th February. Please circulate! Get your banners together! We hope to see as many of you as possible on the 20th this is an important event not just for Poland but for all family farms of Europe and beyond!
See you.
Poniżej znajdziecie notę prasową (po anglielsku i po polsku) w związku z planowanym protestem pod Polską Ambasadą w Londynie. Prosimy o nagłośnienie i przybycie z odpowiednimi banerami 20 lutego o godz. 14:30. Sprawa jest ważna nie tylko dla Polski lecz dla całej Europy i dalej! Do zobaczenia...
Julian and Jadwiga

Polish Family Farms Criminalised for Local Food Sales
The International Coalition to Protect the Polish Countryside and local supporters of Polish family farms are staging a protest outside the Polish Embassy in London 47 Portland Place, London W1B 1JH at 14.30 on 20th February 2014, to highlight the excessively harsh hygiene and sanitary regulations imposed upon small Polish farmers wishing to direct-sell their traditional farmhouse foods.

Since January 2014, over 200 farmers using tractor convoys have been protesting in Northern Polish towns in order to highlight their demands for a change to laws undermining their traditional way of life. Their major demands are: to end foreign corporate buy-outs of prime Polish farmland; to enforce the ban of GM crop planting and to end the criminalisation of farmhouse food sales which they claim to be the most repressive in the European Union.

At a recent farmers blockade a table was laid out with a wide range of Illegal Foods representing virtually all Poland s most popular and renowned farm products. These included smoked hams, sour cabbage, raw milk, bread, pickles and cheeses; all foods that do not comply with the current Polish government demand for farmers to carry out processing operations in specially constructed premises that are not affordable to any but the largest farms supplying the supermarket trade.

The International Coalition to Protect the Polish Countryside is supporting the farmers protest. Sir Julian Rose, President of ICPPC said,
There are 1.5 million family farms in Poland. They are the trustees of the Polish countryside and food chain, yet their lives are under threat. The future of these farmers can only be secured by a government that recognises and responds to their urgent calls. "It's all about destroying the competition - which in this case is the small and medium sized independent family farms that produce the best foods!" - said Jadwiga Lopata, founder of ICPPC; she also has a small farm in Malopolska near Krakow. 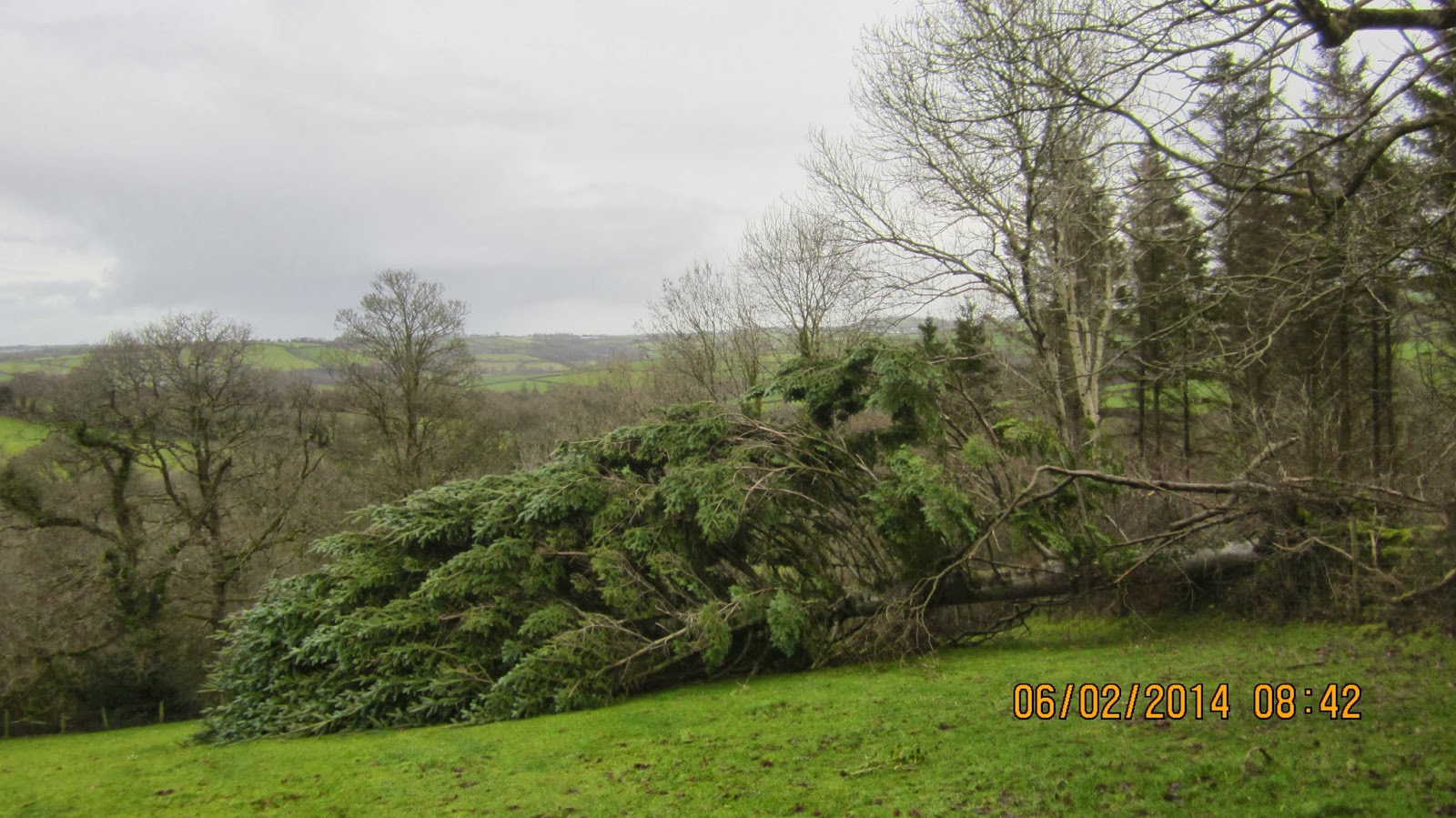 The weather gods permitted us one day off from the tempests & Friday was sunny and cheerful until late afternoon when the storms returned, but goodness didn't that little respite cheer everyone up!

The picture shows one of the casualties of the storms. This very large conifer tree came down last week. It was in field hedge and so has done no damage, but the fields are so wet that the Farmer is unable to get into the field to clear the tree away. When he does it will provide a goodly amount of timber for planking and firewood.

While parts of south west England are being battered half to death & Somerset of course having the most terrible floods, we here in west Wales are also struggling with high waters and rivers bursting their banks. Our local river the Teifi has flooded many fields and it is going to take days of dry weather before any work can be done on the land.
Farmers are desperate to get their muck out from the cattle sheds. It is accumulating rapidly and everyones capacity for storing it is being stretched to the limits. Normally at this time of year the fields are dry and firm so tractors do as little damge as possible but this year we can't, or daren't take the tractors and their heavy loads onto the land. There is going to be so much clearing up to be done when the weather does improve and the backlog of field work will be immense. The forecast is not encouraging...it seems that that the storms are set to continue for the next week or so. It has gone on so long that it feels almost normal to be blown about and soaked every time one ventures outside.
Posted by Jinsy at 01:36 No comments:

﻿﻿ We have risen to a morning without rain! Admittedly it rained heavily during the night but at the moment I am looking out onto glimmering watery sunshine and palely washed blue skies﻿﻿ & the birds are singing...if you can call the eternal squabbling of hedge-sparrows singing but it is a cheerful sound accompanying the trills of blackbirds.

2014 has been designated the International Year of Family Farming by the United Nations. We only learned this when we recived the latest issue of The Land magazine (www.thelandmagazine.org.uk), it is not something that has been heralded in the mainstream farming press as far as I am aware.
According to UN figures there are an estimated 500 million family farms in the developed & developing world.These farms feed 'billions of people' and are being recognised by the UN Food & Agriculture Organisation as 'leading figures in responding to the double urgency the world faces today: improving food security and preserving the natural resources.'
In Britain events to celebrate the International Year of Family Farming are being organised by The Landworkers Alliance and the Family Farmers Association, www.familyfarmingcampaign.net


Here on our very own family farm work on the new dairy continues apace with the floor screed laid yesterday& there is much discussion on positioning of doors and windows. The window placement is particularly critical as we don't want direct sunlight coming in warming the room up, after all by definition dairies are cool dim places.
Here in the farmhouse I have what was the original dairy from the days of hand-milking by dairy-maids and the vast slate slabs where the bowls of milk were set to cool are still in place. The room has two windows which are not glazed but filled with a zinc mesh to allow cold air to flow in. I now use it as a larder and in very cold weather I turn off the fridge as there is no need for it.
The dairy also had some enormous slate salting troughs for curing hams etc. They are beautifully made, carved out of a dark blue slate but they are now used outside as plant troughs.

Despite the weather the cows are milking well and the are very content in their winter housing. They are being fed fodder-beet as well as silage and the milk is noticably richer and with a good flavour. The Farmer & Sons spend the first half of every morning feeding all the stock and cleaning passages with the tractor mounted scraper & then putting out clean straw for bedding. As I write I can hear the constant hum of the tractors in the far sheds with a backing chorus of the calves waiting for their breakfasts.
The milk price at the present time is very good and so we are making the most of it. The market price fluctuates so much that when demand is high & the price is good we all rejoice. I think at the moment we are getting about 40 pence per litre and as a result we are receiving some our biggest milk cheques ever but we know this won't last hence the investment in the new dairy while we can afford it.

The first snowdrops have appeared in the hedgebanks and are a very welcome sight cheering up the perpetual gloom of this sodden February. The continual grey skies and saturated fields are making for a difficult working environment for the Farmer & the Sons who have to be out in the weather whatever the weather maybe. Even walking the dogs is a slippy gooey endurance test through the muddy fields and water damaged lanes & tracks.
However it is not all grey & dismal...yesterday we went down to Newport beach and had a lovely blowy walk with no rain (!!!) along the full length of what is a a superb long open beach bordered on its southern side by the attractive village of Newport overlooked by the brooding mass of Carn Ingli(Angel Mountain) and the other mounds of the Preselis.

The Farmer and the boys are busy constructing a new purpose-built dairy and work progresses well despite the weather.The present dairy is many years old and getting tired & shabby. It is housed in an old Victorian building so to have a smart new room specially built for the purpose will be a of great benefit to the whole process of milk production.
A new milk bulk tank is ready & waiting to be installed once the building work is finished. There will also be a seperate washing room as required by law as no washing facilities are allowed to be in with the bulk tank, it will sit in solitary state in a white cell that can be hosed down. The present system that we have in place whilst acceptable and perfectly clean and hygienic is just out of date, so investment in a new set-up is going to be very worth while.
Posted by Jinsy at 02:00 No comments: