We are back with cold wet weather after what was a stunningly gorgeous weekend.
The Farmer & I went down to St. David's on Sunday to the Really Wild Festival (www.reallywildfestival.co.uk) which was being held in the beautiful ruins of the Bishop's Palace adjacent to the cathedral. A more perfect setting would be hard to find. The small medieval-style  pavilions set up by the Meibion y Ddraig Archers looked amazing in the walled enclosure overlooked by grinning gargoyles and ancient stonework. As well as archery demonstrations there were falconry displays, gun-dog displays (by our friend Meurig Rees of BASC, see last post) and most fascinating of all a shoe maker who specialises in making historic shoes for museums, theatre and re-enactment groups. Ana Deissler (www.anaperiodshoes.co.uk) makes shoes from earliest stone age foot-coverings to Tudor style shoes...they are beautiful and she is so knowledgeable on the history of footwear and the  technique of making period shoes, the Farmer & I were talking to her for ages.
We also spent along time talking to someone from Coppicewood College (www.coppicewoodcollege.co.uk) which is not far from where we live. The college offers courses in a wooodland near Cardigan using traditional tools and covers all aspects of coppice practice and craft., from spoon carving to natural dyeing & charcoal making.
It is extraodinary how small circles of acquaintanceship reveal themselves...we had a number of mutual friends with N. from Coppicewood College and he had in turn heard of us. Wednesdays are open days at the woodland centre and we  must go over sometime to catch-up again and continue the debate over power tools (the Farmer) and traditional non-powered tools (Coppicewood College). I must admit to being more on the side of pole-lathes & hand carved spoons than chain-saws and power lathes...I find them much too noisy & scary to use whereas a pole-lathe is quiet and rather soothing in its action.

On Sunday evening on our return fromSt. David's we went just couple of miles up the road from the farm to art exhibition to which we had been invited.
A couple of weeks ago we had a visit from an Italian artist Rebecca Maria Bellestra who was the artist -in-residence at the Rhod project in Glonc Mill,  Drefelin (www.therhod.wordpress.com). She spent the day talking to us about sustainability, ecological matters, organic farming, the future of farming, all the things that we spent so much time discussing with many of those who end up sitting around our kitchen table. The difference on this occasion was that this conversation was filmed for her project which has taken her all around the world.
Part of her project was shown at the exhibition but most of the work on display was by the Rhod group of artists .
The theme was Future Nature Culture & to quote from the programme notes,
'Rhod is a place for encounters between art, nature and people...the artworks...have been made in response to the site of the mill and its grounds...The artists have eschewed grand gestures and definitive statements in favour of sensitive interventions in which the work is completed by nature.
Future Nature Culture is arejection of the pastoral which idealises and aestheicises nature as something separate and other from human beings. We are animals too.'
There were some beautiful and strange and interes
ting pieces of work including a piece wood cut from the middle of a fallen branch, that had been french-polished, and looked wonderful, but was then put back in its original place in the wood by the stream where of course the french-polish would very quickly deteriorate in the damp and so the wood would  eventually rot away like the rest of the unpolished branch as though man had had no part in its existence.
It was a thought-provoking evening with lots of good conversation.

It is always  rewarding when we are able to introduce any of our visitors to country sports. Today for the benefit of the children from a high school in Cardiff who come regularly to the farm I had arranged for Meurig Rees the Director of the British Association for Shooting & Conservation in Wales (BASC),(www.basc.org.uk) to come to talk about shooting and to demonstrate his lovely gun-dogs.
Meurig spoke of the importance of gun safety and the law regarding possession and misuse of firearms and then the children were shown how to use an air-gun and were allowed to fire at target papers. They loved it of course and asked

sensible questions and responded well to the experience.
After the talk of guns we moved onto the training and use of dogs in shooting. Meurig gave a wonderful demonstration with his beautiful dogs Ceri & Sky, a mother & daughter team. The children were involved in the demonstration when they were required to throw dummies and walk the dogs around...of course they all thought it was great and were very impressed, as were the Farmer & I at the level of discipline of the dogs. We think our own dogs are pretty good in terms of obedience and working ability but compared with Ceri & Sky we have barely started!
As well emphasising the rules of handling guns Meurig also explained how shooting and conservation go hand-in-hand, how shooting ensures that there is a healthy wildlife population including quarry species and well managed habitats which  results in the well-being of the countryside. No political axe was ground and the children were given facts and information on an aspect of country life that they in all likelihood would not experience any other way.
At the end of their visit the teacher in charge, the wonderful Mr. C. said that it had been a brilliant day, which is all we can ask.
Posted by Jinsy at 09:43 No comments: 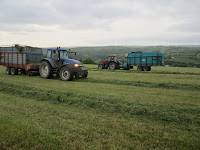 'Welcome, with your lovely greenwood choir,
summery month of May for which I long.'
From a 14th century Welsh poem

May Day! A glorious golden 1st of May but this photograph shows what was happening last year in May & it certainly won't be this year. The season is so slow that it is reckoned to be 20 days later than last year which is going to have severe knock-on effect on the harvest. Many farmers will struggle to get third cut silage and that will have a serious impact on the fodder supply for next winter.
It may seem a bit mad to be thinking in these terms on such a beautiful day but this is our livelihood and having just gone through a very long winter the prospect of a short summer is worrying.

Here in west Wales the trees are only just beginning to show signs of life and whether it will be the oak or the ash first is anyone's guess at present.

May Day is of course the ancient festival of Beltane when fires are lit to bring the power of the sun to the Earth and was regarded as a blessing from the gods to purify & sanctify the community.
Beltane fires were kindled using nine sacred woods, their names preserved in an old Scottish rhyme, but the ninth will always remain a mystery;