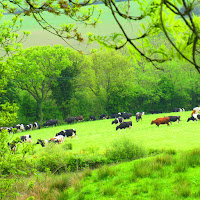 Summertime and the livin' is very easy for the cows out grazing in the sunshine while the farmers are so very busy gathering in the grass for the silage to feed the cows over winter. As always we are thinking ahead despite the temptation to sit and enjoy the glorious weather and planning the work schedule for the tractors and drivers for the next few days hoping the weather will hold so they can get all the contracting work done. We got our own silage clamp finished yesterday and all sheeted up as the next cut will be baled.

The Farmer & I were very thrilled this afternoon to realise that we have a colony of house-martins busily building their their neat little mud-nests under the eaves of the farmhouse along side the nests of the swallows. I have not known martins to be here in the thirty-odd years I've lived here though the Farmer says he remembers them in great numbers in his childhood. They can have arrived only in the past day or so as their nests are still very little more than a wodge (technical term!) of mud stuck to the wall in the shadow to the eaves. Why they should returned now is a great mystery, but wonderful. We shall be watching their progress with a fascinated eye and hope they will raise successful broods. We now have colonies of swifts shrieking and diving along with the madcap aerobatics of the swallows with their cheerful chatter and the pairs of martins busily chittering away to each other as they bring their beakfuls of mud to the wall, all living in and around the house and farm buildings and sharing the air space with the numbers of sparrows that are permanent residents.

Whilst walking along the drive the other day I was able to photograph this Speckled Wood butterfly as it rested briefly on a beech leaf. So beautiful. 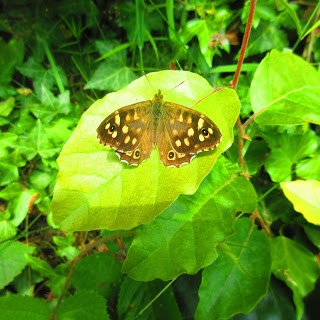 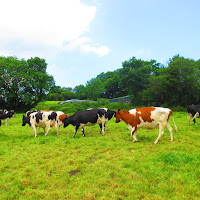 Earlier this week we hosted a lovely group from Brecon for a farm walk. They were members of the wonderful U3A organisation (the University of the Third Age, www.u3a.org.uk ) which is for people over 50 who wish to continue learning. There are no exams or tests just opportuniites to attend talks & lectures on every subject under the sun as well as having trips to interesting places. There are branches of U3A all over the country and each branch will have it's own specialist interest groups. The party that came to us from Brecon was the Wildlife Group.
About twenty-five people came, all of advanced years, the oldest being 94, and they all walked the farm with The Farmer and me and were the most attentive and enthusiastic group. They were shown the milking parlour, the cows, given a history of the farm over the past 200 years, and walked the fields to see our magnificent laburnum hedges in full flower and to exclaim over our beautiful views. After the walk we all came back to the yard to sit in the sunshine enjoying tea and cake. As well us telling them about the farm & food production, they asked very intelligent questions and this resulted in interesting discussions on politics, Brexit and the future of farming. It was a very pleasant and stimulating day for all concerned. 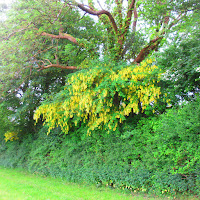 With the glorious weather over the past week the Farmer & the Sons have been very busy on silage. We did a second cut for ourselves and then they've been out doing cuts for neighbours. In addition to driving a tractor al day the Farmmer has found time to make a start on the shearing. Although we have only 50 ewes the Farmer has found that if he shears them in small batches over two or three days he finds it less exhausting (is this age beginning to catch up? he used to think nothing of doing the whole lot even when we had a greater number number of sheep, in one day!) The Sons will have nothing to do with the sheep! Amongst the seheep there is one lamb who was bottle-fed and it escaped from the yard and appeared in the house to my dismay. A large lamb bleating for company in one's kitchen is not really desirable. 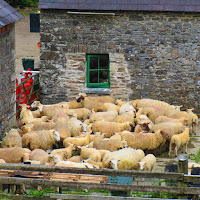 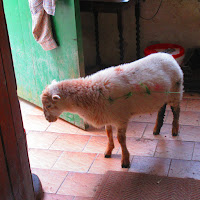