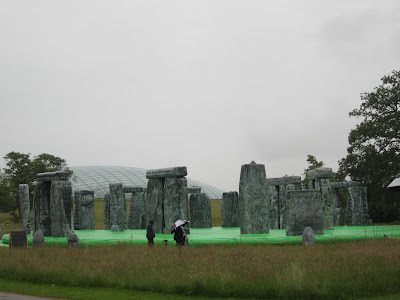 In keeping with tradition today being the Summer Solstice the Farmer & I paid a visit to Stonehenge...however this was Stonehenge as we had never seen it before. It was an inflatable bouncy castle full scale replica of the great stones complete with trilithons and sarsen stones and, quite the maddest, most bonkers thing I have seen a long time!
This extraordinary object was having its first & only appearance in Wales today at the National Botanic Gardens of Wales near Carmarthen at the start of its tour around Britain before reaching London for the Olympics.
When we arrived at the Botanic Gardens there were several coach loads of schoolchildren brought to see the amazing sight and to bounce merrily but the unfortunately the rain had also arrived and so the bouncing was brought to an end which must have very disappointing for the children. We viewed the very realistic rubber titans through a veil of heavy rain and it really was very surreal with the great glass dome of  the  Botanic Gardens in the background. 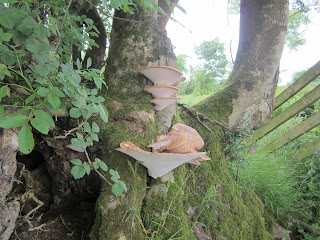 While the Famer was mowing grass for silage on some fields we rent about a mile away he spyed these amazing fungi growing on a tree. They are  huge fan shaped bracket fungi which were identified as Dryad's Saddle, a rather wonderful name. They are certainly some of the biggest and most impressive fungi that I have ever seen, they must have measured a good 12-14 " across at their widest point.
With the heavy & persisitent rain back with us we are congratulating ourselves on having been able to get our first cut silage crop in & sheeted up before the low pressure arrived yesterday evening. The Farmer & the Sons have worked long hours this week, with the Sons working away from home getting in other peoples silage as well as our own often not finishing until well after dark.
The three days of good weather were just lovely and now we are back to wind & rain & squelching across our shaven fields and rushing waters in our streams again.
I think solstice fires may well struggle tonight.
Posted by Jinsy at 10:24 No comments:

Last evening on S4C (the Welsh tv channel) the film 'Tan ar y Comin' was shown again . This was the film about a gypsy boy & his horses starring Edward Woodward & directed by David Hemmings, that was made here at Penyrallt nearly 20 years ago. Watching it again was great fun as it brought back lots of memories of a very hectic summer.
A daily invasion of about 60 people and all the film equipment plus wardrobe buses,  props vans, caterers & all and sundry needed to make a film would turn up usually about 7 o'clock to get everything ready to start shooting at 9-ish. We were involved too, not just as the owners of the location but as extras, props suppliers, animal handlers & general farm advisers. I have clear memories of David Hemmings turning up very early one morning ahead of the rest of the crew and sitting in the kitchen drinking coffee with me while waiting for his assistant directors to appear. For some reason the conversation was about breeding poodles!! Very odd as neither of us had poodles.
It was fascinating watching DH direct his cast and how he prepared every shot and worked through exactly what he wanted with the actors and the camera-man.
Both the Farmer & Elder Son had several opportunities to be in the film and can be seen briefly appearing in the scenes shot in Newcastle Emlyn at the fair. Elder Son is the naughty little boy who gets scolded for throwing mud at the gypsy boy, the hero of the story.
The farm has changed very little since the film was made, though the house is now yellow not white, thanks to another film project that took place some years later.
'Tan ar y Comin' was shown ahead of a new series being shown on S4C starting next week about the gypsies in Wales,
'Y Sipswn' in one episode of which Carol Byrne-Jones the director of the Welsh version of the film, is interviewed here on the farm.

After days & days of torrential rain, we have had a day of sunshine which has meant that the men are flat out cutting silage for ourselves and others. It is going to be a very long night for them I suspect. The crop is very heavy  and thick which is good but makes for long hours of tractor driving.

Yesterday the Farmer & I went to the Welsh Game Fair which was held for the first time at the Three Counties Showground near Carmarthen. It opened on Saturday which was so very wet but yesterday the weather improved and we had only a couple of showers. We had a lovely time watching terrieres & lurchers & talking to various people we had not seen for a while. I dearly wanted to bring home some Muscovy ducks but this was not encouraged...the reason given being that they would just be expensive fox food! It is true of course but we had Muscovies years ago who survived many years and were such fun to see around the yard and flying up onto the roof ridges to survey activities. They are real characters & very good mothers unlike many other ducks. Maybe when the Farmer gets himself a new pea-hen I shall mention the Muscovy duck question again.
Posted by Jinsy at 12:11 No comments:

At last we have some sunshine & rather more seasonal weather than we have seen recently. Because it has been such a cold, slow spring & early summer the roses are only now beginning to show some colour and this one Maigold outside the holiday cottage door is in full flower a month later than usual. The scent as one walks past is glorious.
Our local village shop has an amazing array of plants for sale and I indulged myself last week (to cheer myself up in the rain!) buying ten floribunda roses  to add to the garden. Many years ago we had a commercial rose grower renting a field from us in which he grew 20,000 roses and I was fortunate enough to be allowed to cut flowers whenever I wanted, so each summer I was able to fill the house with bowls of roses which was just wonderful. To walk down to the rose field on a summer's evening was a most wonderful experience with the swallows swooping through the perfumed air & the sea of colour at our feet.

Yesterday we had the good fortune to capture a swarm of bees. I was walking across our larger garden and was aware of a deep thrumming sound and realised that the swarm was gathering itself together, so I rushed off to find the Farmer who found the swarm collecting on a fence post (not the most convenient place for capture). He shook water over them to make them think it was raining which makes them settle in one place and then left them for a short while before persuading them into a collection box and delivering them into a hive that was made ready for them.
We have not had a swarm for several years and this one was not from our existing colony. There are a few bee-keepers locally so we cannot be sure where it came from. Lets hope they like being here & that they will stay and survive the winter.

I have no guests in the cottage (http://www.penyrallt.co.uk/) this week and so have taken the opportunity (my last chance before the autumn) to do spot of decorating, the small twin room was looking rather shabby so yesterday I set to with my brushes & pots of paint. It is small room but quite complicated to paint as the beds are fixed in with a 'proscenium arch'  which looks marvellous but does make painting the room awkward. Also the room being in an old former piggery is not square and one side is higher than the other whcih makes my reach on step ladder or on a board across the bed-base rather precarious...in fact I'm going to have to call the Famer in to do the very tops for me.
Having filled in time waiting for a cake to come out of the oven by writing this I shall now head off back to my painting & try get the room finished before lunch.
Posted by Jinsy at 02:16 No comments:

June has arrived & our wonderful rhododendrons are coming into flower as is much else in the garden. After last week's scorching weather and the rain of two days ago all growing things are romping away now. This is good news for the Farmer & Sons as our silage crop will bulk up well now

Last weekend the Farmer & I were down in the New Forest for a family gathering and the heat was intense. Driving down the motorway in our Daihatsu Fourtrak which does not have air-con was not a comfortable experience! But the countryside was looking superb in its shimmer of heat haze, with glorious chestnut trees in full candle-power, England at its best!


It is Diamond Jubilee Weekend of course & though we are not having any party or picnic here on the farm the local pub is all bedecked with bunting & a barbecue is planned, whilst elsewhere in the area there are 'fayres', frolics & fireworks. We may even go to see some of them! I shall certainly find a tv to sit in front of tomorrow for the River Pageant which will surely be the most fantastic spectacle.
Driving through England there was much more evidence of Jubilee enthusiasm than is visible here in Welsh Wales. Many of the little villages we passed through in Hampshire & Dorset had miles of bunting draped along school railings & village halls & many private houses had union jacks & pictures of the Queen on display. There were posters for tea-parties & picnics & open gardens. It all seems much more low key here, in fact in our local town on Thursday there was no sign of any Jubilee celebration at all; maybe they were saving themselves for the weekend.