Old Year Out, New Year In 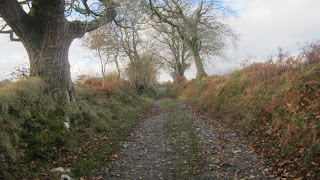 Out with the dogs in the last of the light on the last day of the old year I heard the bell tones of the hounds of our local hunt and the horn of the huntsmen echoing down the valley knelling the end of one year and the advent of the New Year. The hunt had been working in the valley all day and were collecting the hounds for their weary way home to their kennels and well earned food and rest. We had not been able to go the meet as I had a changeover in the cottage but it was wonderful to hear the hounds at the end of what has been a busy day.

On Christmas Eve I hatched a real stinker of a cold and so the festivities were enjoyed through something of a fug which was unfortunate but the Farmer & I still managed to go to St. David's cathedral for Choral Matins on Christmas morning to hear the choir sing gloriously and then go to look at the sea crashing dramatically along the Pembrokeshire coast.
Before my head-cold made itself known we managed to throw a party the night before Christmas Eve. We had about 40 guests and it of course involved a lot of cooking, cleaning and the decking of halls which seemed to take most of the week. The end result of all our labours seemed to please people & I think we made a very good start to Christmas with the Farmer greeting our guests with glasses of mulled home-made cider & mulled home-made plum wine (very popular!). A neighbour had recently killed some pigs and very generously gave a home-cured ham & a joint of pork to the feast and I had made a partridge terrine as well as the usual sausage rolls, quiches and bread rolls. It was a proper old-fashioned country feast with as much home produce as possible including quince jelly, sloe & apple jelly & chutneys of various kinds to accompany the meats and even our own walnuts in the Waldorf salad. It was fun to do.
To continue the theme of old-fashioned & home produced the evening's entertainment was provided by a magic lantern slide show. The magic lantern is a unwieldy contraption that belonged to the the Farmer's great-grandfather and has a large selection of glass slides. Some are just views of cities such as Manchester in the late 19th century, others are, what to our eyes are very un-PC, comic strip cartoons involving wash-tubs and grotesque 'minstrels' (you get my drift, I'm sure) which are difficult to view in the 21st century. There are also a couple of sets of stories including the dramatic 'The Curfew Must not Toll Tonight' a tale of derring-do set in the time of Cromwell, who surprisingly turns out to be bit of a hero, but the most interesting is the set of slides depicting the Artic Expedition by Sir John Franklin in about 1875. These are beautiful engravings of ships trapped in ice, dog-sled teams and Englishmen dressed in furs braving horrendous conditions for the sake of the Queen & the Empire. They don't make heroes like that any more!

The farm work continues regardless of festivals and national holidays and between the three of them the Farmer & the Sons have shared milking duties during the week, allowing each one of them some time off to attend parties and take small children out to events as well as attending shoots and musical evenings.

So, at the end of 2016, an eventful year to say the least, I wish you all
Blwyddyn Newydd Hapus

A glorious crisp frost-rimed morning with clear blue skies dotted with silver-backed gulls and ragged black rooks tossing around in the sharp wind as they caw & cark spying out the land below them. The frost has outlined leaves and grasses and they will remain so throughout the day in the sheltered corners unreached by the low sun as will the marbled ice in the water-filled wheel-ruts in gateways. There is a thin skim of ice on the ponds, not enough to bear a duck as in the old country saying that if, before Christmas, for three days the ice can bear a duck then we're in for hard winter, but we have plenty of time yet for three days of duck-bearing ice to arrive.

On a recent journey we drove through a small village and came across this novel use for an old telephone kiosk. It functions as a village library. People are encouraged to borrow books and to add to the collection and is brilliant way of giving a new lease of life to what are now redundant and useless structures in these days of almost universal mobile phone ownership (except for me!). As there is a real shortage of proper bookshops in this area and the public libraries are under threat of closure perhaps more villages should utilise small buildings in such a way. It can only be of benefit to the local communities & to the reading public.