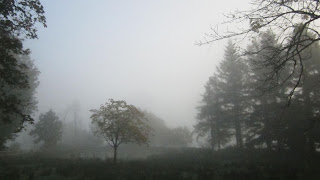 We are in the season of misty mornings and gilded leaves and for few days now, no rain after a very wet couple of weeks.
The cows are in their cubicle sheds the work each morning has increased with scraping the sheds out, putting down down fresh bedding and bringing in silage to the feeders.

Last week the Farmer & I had a couple of days away to attend the AGM of our milk buying company,OMSCO, the Organic Milk Suppliers Co-operative(). We travelled up to the the Midlands staying a night in Herefordshire with family before heading off to a hotel near Kenilworth to join a group of about a hundred fellow OMSCO members. It was a very stimulating and interesting couple of days. In addition to it being the annual AGM it was also celebration of the 25th anniversary of the founding of OMSCO by Sally Bagnall who was present. Once the business of the AGM was dealt with we had presentations from a number of guest speakers including Henry Dimbleby talking about his role in National Food Strategy with DEFRA & Cynthia Guven, the Agricultural Counselor at the USDA in London(United States Dept. of Agriculture) and representative from the American organic company Organic Valley. All the speakers were very positive about the role of organic farming in the future of British food production and in ongoing trade deals with both Europe and the US(whatever the outcome of Brexit negotiations!) All this serious stuff was fascinating but we had some wonderful light relief provided by the after-dinner speaker Miles Jupp the actor and broadcaster, who was hilarious and had the audience of cynical farmers roaring with laughter. We came away from the conference with much food for thought on the future of British farming, most of it positive though with a few concerns over international trade and food standards but on the whole organic milk production seems secure.

Two years ago the Farmer was asked to submit some honey samples to a Ph.D. research project on pollen DNA. Today we had the results back and very interesting they are too. The sample was taken from honey extracted in July 2017 and the results are showing that the plant species identified by the pollen analysis as being most evident in our honey were Rubus sp. or blackberry, Trifolium repens or White Clover, Brassica spp. or Cruciferous Vegetables, Cabbages, Mustard or Rape and Rosa spp. or roses. The last two species were a very small percentage while the blackberry provide 70% of the plant DNA found present and the in the overall analysis of the samples taken from all over Britain the picture is the same. So, bramble thickets and hedges are more vital to the bees than we had realised.
We have a very good honey crop this year and the Farmer has been busy making new hives in preparation for next year. We have about ten hives at present and hope to go up to twenty or so. This will involve a lot more active bee-keeping but the Farmer is happy to be a bee-keeper rather than just someone who keeps bees...there is fine distinction between the two! 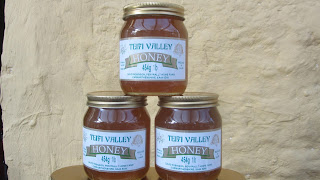 I had a very abrupt wake-up call this morning from the Farmer who was standing below our bedroom window yelling for me to get downstairs to help with two heifers who for reasons best known to themselves had decided to escape from the collecting yard by the milking parlour and go for a wander in the garden! I found one of them quietly standing in the rain under an apple tree munching on the windfalls with great relish, the other was elsewhere being dealt with by Younger Son while Elder Son was busy keeping milking going. These things don't happen very often but young heifers unused to the milking parlour occasionally decide to not play the game and so make a break for freedom. However once they are brought back in and calmed down with gentle words and no shouting or fast movements they soon accept the situation and from then on go to be milked without any fuss...especially once they realise they get cake in the parlour (doesn't that sound very genteel & Cranford-ish!).

It is another very wet morning and when it is not actually raining everything is dripping and we have mud again where last week we had dust. The wet weather has seen the end of the blackberries, they are now soggy anf tasteless after what has been a very good season. My freeezer is full of boxes of brambles and my larder shelves have a goodly stock of jam and jellies after many afternoons spent walking along our hedgerows with a basket and the dogs. They love the blackberries too and eat them off the fruiting bramble cables at the bottom of the hedges. 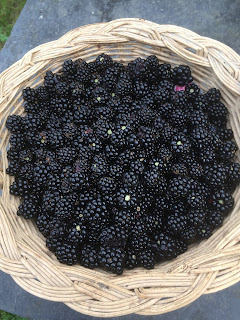