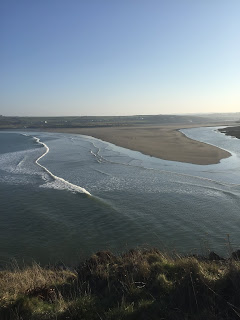 Last week was half term in Wales and so the Farmer & I took the opportunity to take our grandchildren away for a short holiday. It was the first time they had gone away with us overnight but it was hugely successful. I had found a delightfuly eccentric cottage only two minutes walk from the beach on the Parrog at Newport in Pembrokeshire so althought the children were with us for only one night we spent almost the whole time either on the beach or walking the coast path. Both the children(8 and 5 years respectively) are good walkers and were quite happy to keep going to see what was round the next corner and finding tiny hidden coves where they scrambled over rocks and searched for sea anemones and pretty shells in the pools, to say nothing of competing with their grandfather in playing ducks-and-drakes (skimming flat stones across the water to see how many 'hops' the stone would make). The children's parents came to fetch them home on the second evening and the Farmer and I then had two days to recover! We were incredibly lucky that this little jaunt coincided with the most glorious weather...it really was like high summer which is of course all wrong for the last week of February! To think that this time last year we were in the grip of freezing temperatures and snow and ice making life so difficult. 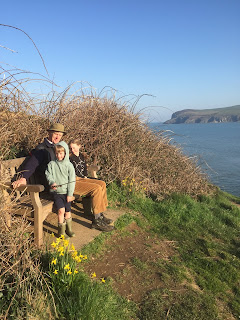 We returned to the farm to find that lambing has begun. We didn't have a great start with some lambs not surviving and a dead ewe but things have now improved and last night we had a set of lovely strong triplets to add to the tally. We are lambing only about 30 ewes so every loss is significant but now things are looking up and hopefully we will not have too many difficulties from now on. Fortunatley the weather is reasonable despite the occasional rain shower so the ewes and lambs can go out once tha lambs are a couple of days old. 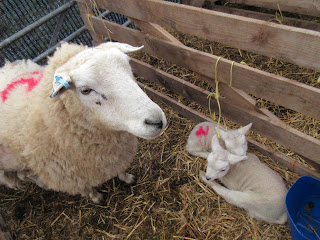 With March of course come the daffodils and we have so many all around the farm, of many different varieties from tiny little tete-a-tete and my favourite Tenby daffodils the little 'wild' ones to the rather vulgar flamboyant golden trumpets that herald in the spring. With strong winds we have had over the last couple of days a number of the daffies don't d=survive th buffetting so I go round each morning gathering the fallen flowers and so so I have jugs of glorious golden bouquets all through the house. 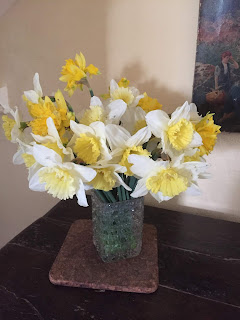