After a very long time since my last posting I have grabbed a few minutes to catch-up.
The past month has been incredibly busy with the arrival of grand-child no. 2...a beautiful little boy who arrived at the end of August, the puppies, holiday-makers, house-guests and all general stuff of living here.

The puppies are now nearly 9 weeks old and I still have 4 here on the farm. The other 6 have all gone to their new families in the last week and another goes tomorrow, one next week & we are keeping one until the end of October for its new owners and we are keeping one for ourselves. As in previous times I am amazed how far people will travel to buy a puppy, we have had buyers from Surrey, Stafford, West Midlands & South Wales although I am pleased that a couple are staying locally, indeed one is only a mile down the road in the village.

In the past few months Country Living magazine has been running a campaign called Keep Britain Farming and readers were invited to nominate farms, whether their own or someone else's, for the chance to wina beautiful enamel farm sign. Well, in an idle moment I filled the form in. I had to say why I thought it was important ot keep Britian farming and to give a short description of why I thought Penyrallt was worthy of a sign. I wrote about how we were a small traditional family-run mixed farm of a type that is increasingly rare nowadays, and that we now had the 4th generation growing up here, that we farmed organically & with a hope for sustainable future in farming.
Britain needs farmers for food production (though there is a school of thought that disputes that!), maintenance of the countryside, employment, the preservation of skills & crafts and a host of other factors not least the general sense of well-being brought about by a 'green and pleasant land'.
Anyway, I completely forgot about having submitted the form to Copuntry Living until I recieved an email informing me that I had bee awarded one of the 100 signs that were available.
(I forgot to mention that the campaign had only 100 signs to give out. They were made by Charnwood, the wood-burning stove manufacturers.) 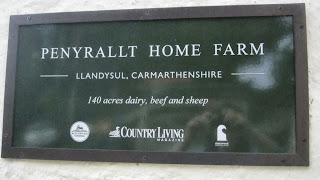