In response to a request from L.H. who is the new owner of one of the puppies, to post some photos of his puppy on the blog, here they are. Apparently the puppy is to be called Buddy which I think rather suits him...he is large & chunky and is going to grow to be a rather handsome dog. He will be going to his new home in the next 10 days or so and I'm sure he will thrive and bring L. H. & Mrs L. H. much pleasure, though I am also sure that he will drive them to distraction as is the way of all young labradors! The first 2 years are the worst!! 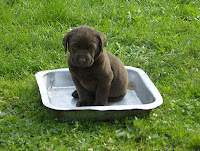 We still have the Japanese Shiba Inu here and there is nobody claiming him despite postings on the internet on lost dog sites, the breed rescue sites & the Carmarthenshire Dog Pound page of the Council's website. In the next day or so I'm hoping he will be collect by the Shiba Inu Rescue people who understand the breed and will hopefully be able to trace his owners or find him a good new home.
Posted by Jinsy at 10:06