Joyful Spring, Food shortages and the need for farmers, 'Greenwashing' 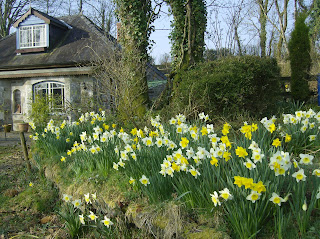 A glorious day of sunshine, blue skies, birds singing and daffodils in golden hosts all around the house and farm gardens and standing in a guard of honour all the way up our drive. A sure way to cheer everyone up despite the horrors being perpetrated in Ukraine about which one feels so helpless. However, it is no use us sitting around being deeply sad and angry, that helps no-one. The best thing we can do is get on with our lives and contribute in what ever small way to improving the world. If that means planting flowers to make people happy then so be it. I think with the threatened food shortages that may well be coming in the next year or so then many more people will be starting to grow their own fruit and vegetables which can only be a good thing. The Farmer has said he will be doubling the amount of potatoes he usually grows and I fully expect him to be growing more than usual of almost everything else. 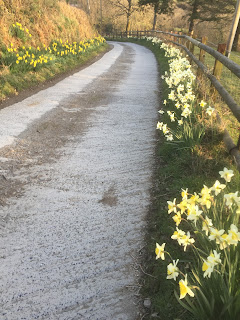 With the sanctions on Russia and the difficulties over fuel supplies everthing has gone up in price and farms are struggling with a 200% hike in the price of fertilisers (although as organic farmers we do not use chemical fertilisers) which is going to cause real problems for many farmers. Whether this will be a good thing for organic farming is hard to say. I suspect that all farming methods will be utilised to their full extent as the farmers of Britain rise to the challenge of producing food for the nation whether the government sees the need or not. With the Irish government urging its farmers to increase production by 30% surely our government must see that it needs to address the issue sooner rather than later. Britain's farmers are ready to do whatever is needed and it will be interesting to see that suddenly we become an important part of the nation once again having spent so many years being regarded as unnecessary park-keepers when it was thought that we could import everything required...how incredibly short-sighted and stupid were those politicians who believed that! The mantra has now become 'buy local, buy British'. There is growing debate over the question of environmental recovery projects and the need to grow food. This is highlighted by the current trend for good agricultural land being planted up with trees which is now being looked at with sceptism by non-farming people (farmers have always questioned the practice). While there is a need for tree-planting the need to be able to grow food is greater...the two aims can run concurrently but there has to be common sense. Plant the areas that cannot grow crops or grass for livestock, not fine flat fields with good soil. Much of the problem has come about by the carbon-off-setting companies buying tracts of land, particularly here in Wales. Family farms are bought by London-based companies at prices that make the farms unaffordable by local people, with a view to taking to planting trees (often unsuitable non-native species)to sequester carbon and then selling off carbon credits to their shareholders for profit. This is a very lucrative business and is used to 'greenwash' their unsustainable activities. Meanwhile local farming families cannot buy land and buildings in which to live and raise their families and GROW FOOD.
Posted by Jinsy at 04:24