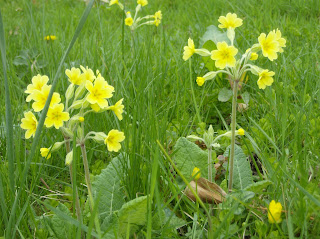 This year spring is struggling to get going somewhat in terms of the weather. We are getting a mixture of chilly days with frosts overnight and then a spell of warmer grey days with a hint of damp in the air and overcast skies but hrough it all the flowers are in their annual loop and we are enjoying the cowslips which I am endeavouring to establish in my new garden and along the hedgebanks violets are turning their faces to the sky along with the tiny wild strawberry flowers. The blackthorn is beginning to drape its veils of lacy white blossom over the hedges and we are seeing hints of green coming with the hawthorn. The birds are singing madly and loudly and seem undettered by the vagaries of the weather, the mating season is on and nothing stands in its way. We are still lambing though the end is in sight and the ewes and lambs out in the fields add their calls to the general spring cacophony. Field work is being done with a large field having been ploughed and harrowed last week and then spread with lime and sown with peas and oats for silage later in the year. As the Farmer pointed out recently, farmers have been tilling the land for millenia and he feels it is privilege to be part of that continuum no matter how difficult it is at times. The survival of the traditional family farm is the backbone of British agriculture and we will carry on despite the politicians, foody-extremists with their somewhat wacky and unrealistic agendas. For too long now politicians have taken the view that food security is not important and now with the war in Ukraine and the rising prices of fuel we cannot rely on importing the bulk of our food supplies. The consumer may have to change their eating and shopping habits and as I have said before 'Eat local, eat British' will have to become the norm rather than just a promotional slogan. 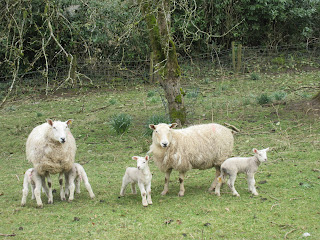 My little Jack Russell terrier, Dottie is feeling very sorry for herself after having a contretemps with our sheepdog, Judy yesterday. She is suffering for a few gashes and bruises after a squabble over a scrap of food. An unpleasant but minor incident resulting in a nasty wound that the Farmer stitched up very neatly and without Dottie making too much complaint. It is amazing how our dogs have such absolute trust in the Farmer who very calmly carefully tends to them that they will tolerate being stitched up. Dottie is ten years old and this fight has left her rather subdued but being a feisty character she will bounce back in a day or so, meanwhile she is curled up in her bed here in the kitchen 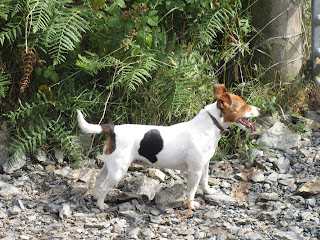