The Secret Life of Farm Animals on BBC4, Polish family at Penyrallt 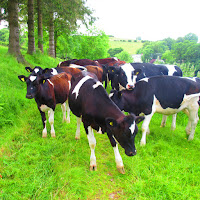 Tonight sees the broadcast of the television programme we spent much of the summer working on. The programme is called 'The Secret Life of Farm Animals' and is to be shown on BBC4 at 8.00pm tonight, Thursday 6th December. (I'm sure it will on BBC iPlayer soon after broadcast if you miss it.) It is the first of 3 episodes each an hour long. We have been told that the trailers for it have been lovely but as we don't have television (not for 30 years!)we have not seen them but we shall be going over to one of the Son's houses to watch. It will be very interesting to see how the long hours of filming with sometimes rather unco-operative livestock will have been edited and put together in what I've been promised will be a very beautiful programme. We were not the only farm that used as a location and we are curious to see the other farms featured.

It's been a while since my last post, things have been busy we seem to have been off the farm quite a bit lately. One of the outings was to the Royal Welsh Winter Fair at Builth Wells. It was good day out catching up with old friends and bumping into neighbours whom we rarely see though they may live only a couple of miles away. There was much of interest to see and the Farmer spend much time talking to reps. from a variety of agricultural and technology companies about the merits of alternative technologies, the latest designs in mowing machines or lighting for miklking parlours. I did some Christmas shopping or as the Farmer irritatingly refers to it 'retail therapy'!

The Jack Russell puppies are thriving, now six weeks old and very lively and jolly. We have homes for them both, one is going to live on sheep farm up near Lampeter and the other is going as a family pet down in South Wales. Both little dogs will have very happy homes 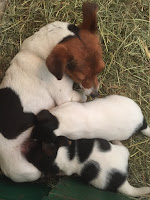 Another of our trips out was to meet a friend in the attractive samll town of Llandeilo being a reasonably central point for us all. We meet for a delicious lunch in the Cawdor Hotel and caught up with family news from both sides.
We first met Krystyna some 15 years ago when she called at the farm in search of her history. It turned out that she had been born in our farmhouse, the child of a Polish cavalry officer who with a fellow officer had bought the farm after the end of the Second World War. Her father had been from a very wealthy background in Poland but had lost the family estates due to the takeover of Poland by Germany. Somehow he survived the horrors of Katyn Forest and ended up in Britain and turned to farming to build a new life. What brought him to what, at the time, was a remote corner of west Wales I don't know, unless land was cheap here. However he and his fellow ex-cavalry officer worked Penyrallt for a few years and raised their families before moving on elsewhere. It is an amazing story but not unique as there similar tales of Polish soldiers settling in other parts of Carmarthenshire. Krystyna had traced the address of the farm and came to see us. She was so delighted to see the farm and of course we gave her a warm welcome and showed her round. It turned out that she had photographs of the farm back in the early 1950's but had never been able to work out their location but was now able to match the images with the reality. It had not changed so very much. We have since become friends and she and her Scottish husband and her family have visited us several times and we have been to her home in mid-Wales. She also lives in London and has an apartment in Cracow. Her Polish heritage is hugely important, she receives Polish television & radio in her house and has brought her family up in Polish traditions. She is an artist specialising in religious icons and exhibits in London.She is a delightful addition to our circle of friends though we don't meet up very often and her story is part of the fascinating and rich history of an old farm in west Wales.
Posted by Jinsy at 03:31