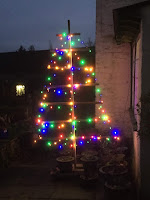 It is New Year's Eve and having been away for Christmas I must end the the old year with a 'tidying-up' post.
The Farmer & I instead of doing what has become a our usual Christmas escape, a run down to St. David's cathedral for choral matins on Christmas morning, this year went to join all my family in a remote and rambling farmhouse in the sheep-strewn hills of Radnorshire. Our Sons stayed home of course to attend to the cows and had Christmas with small children while the Farmer & I had a splendid time in a party of twelve including all the grown-up nephews & nieces some of whom we had not seen for nearly two years. It was lovely and on Boxing Day more family arrived to make a total of eighteen for the traditional lunch of left-over turkey.
We were staying in a very old farmhouse that suited our needs perfectly and the owners had provided a beautiful Christmas tree for us. We three days of much laughter, too much food and very good company.
On Christmas morning some of us went to the eucharist service in the lovely, small, ancient church of Llandeilo Graban where we sang carols most heartily and listened to a very heart-warming homily from the cheerful and enthusiastic vicar. His message was that even if one is not a church-goer the fact that on the special days days of the year such a Christmas a need is felt to mark the day by going to a place of spirituality is important.
We had reared turkeys again this year and so were able to supply the birds for lunch as well some home-cured hams from the television pigs (see previous posts) while the rest of the family brought Christmas puddings and many other good things. We had excellent coffee as one niece is a barista home briefly from the Antipodes and a variety of cocktails concocted by one of my nephews who has become expert in that field having been working at Hawksmoor in Spitalfields in London.

The weather has been very un-Christmassy, warm and damp with heavy grey skies and mud everywhere. I do hope that we get some good cold weather soon.

On our return after three days away the most important thing that needed to be done was the slaughter of the two pigs that that the Farmer had bought to replace the tv. pigs after they had been been turned into sausages, hams and joints. So this week has seen the cold store in use once more with the carcases hanging before being butchered into the necessary parts. We will take meat to a local butcher to be made into sausages though the Farmer will cure the hams himself. Home-cured ham is delicious, quite different to commercial ham. The last hams made here were cured using dark brown sugar and there was definite treacly hint to the ham which was very good.

Younger Son is hosting a New Year's party this evening to which he has friends coming from all over the place so, no doubt, the farm will be dotted about with hangover victims tomorrow. Unfortunately the barista cousin is on her way back to New Zealand so is not available to make sure of a goodly flow of coffee to clear the heads in the morning.