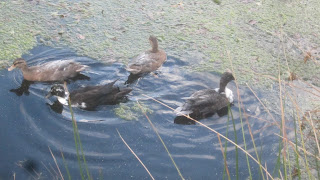 On returning from an outing on various errands a few days ago the Farmer announced that he had bought me present. Now I'm always slightly suspicious when such things are said as eager anticipation can be dashed by the arrival of a new garden fork or a handful of buckets. However this time my suspicion was mis-placed as what duly turned up were two pairs of call ducks. I've always wanted ducks on the pond and while we have wild mallard making brief re-fuellling stops they never stay stay more than a few hours at most, so to have some tame, hand-reared ducks to live on the pond is lovely. They have settled in very happily and already the mat of weed is receding as a result of their feeding habits. Their duck house is on a small floating island and so they have a good chance of not being caught by Charlie Fox which is usually the doom of poultry not surrounded an electric fence as are all our laying hens. The two drakes are handsome in black and white plumage while the ducks are dressed as usual in discreet shades of tawny & khaki. 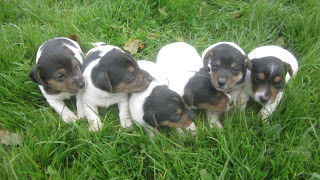 The puppies continue to thrive and get jollier by the day. They now bark when I go in to them which is very grown-up and they startle themselves somewhat by it.

Work going well with the new milking parlour and we were discussing how the first 'training' session of the cows will be handled. They have to be shown the new parlour and walked through it a couple of times before theya re actually milked in it so that they can become accustomed to the new building and the new layout of a herring-bone system after the old abreast parlour as well as a different set of noises. Cows are creatures of habit and need to be handled gently and with care in any new scenario.
Posted by Jinsy at 01:44