Christmas morning and I was still asleep although the Farmer & Elder Son were out doing the milking & feeding calves when suddenly I became aware of running feet, muffled shouting and doors opening & shutting noisily. No, it was not Father Christmas rushing to get his round finished before the sun rose, it was a bovine obstetric emergency. Our last cow had calved during the night but when the Farmer checked on her at about 6.30 this morning he found she had managed to have a complete prolapse of her uterus. An unpleasant sight to say the least but a situation that requires immediate attention. Younger Son & I both got up speedily and went out to the shed to find the Farmer & Elder Son waiting for the vet. The poor cow looked very uncomfortable and there was nothing any of us could do. In the event our wonderful vet arrived and gave the cow an epidural and then it took three men to shove the uterus back into the cow while another one held her head. Two hours later she is standing and looking to make a good recovery, thank goodness. Sadly, the calf was dead.
The uterus is a huge organ and if it is exposed for too long can lead to significant heat loss for the cow, indeed the steam coming of it as we stood was amazing, so it is important that it is replaced as quickly as possible. It is so large that it does take a team of people to push it back. A large plastic sheet is placed under the organ to enable it to be lifted and supported whilst being forced back in place. The prognosis after such an event is usually good and the cow can on to have subsequent calves without any increased risk of such a thing happening again

I, for the second year running am not having to cook Christmas dinner as we are going over to Elder Son's cottage with all the family. The two small grand-children are in the traditional state of hysterical over-excitement, tears before breakfast and the day is already too much for them. Why do we do this ? It's madness...too much hyped-up anticipation & too many presents(grumpy Granny moment again!) yet there will be lovely moments when you suddenly realise that Christmas is fun. Yesterday, Christmas Eve was fun...a continual stream of cheerful people calling and sitting in the kitchen over coffee and mince pies. I think I must have greeted over a dozen different lots of friends who came to say Merry Christmas and some of whom called to pick up their turkeys as well.
The Farmer & the Sons spent last weekend killing, plucking & dressing turkeys. We reared only 10 this year so it was not too onerous.
Now I am off to make bread sauce and trifles and to check on the Christmas pudding steaming away on the Rayburn...my contributions to the meal. 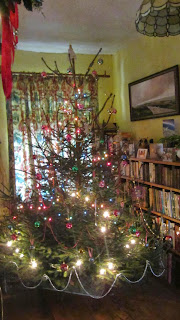