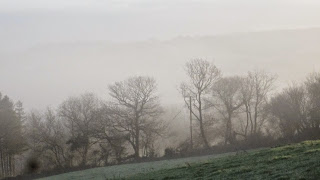 Misty winter mornings are some of my favourite parts of the year & even more so when combined with frost. Today is such a morning. The mist has now lifted and we are enjoying blue skies and the silver glitter on the roofs is disappearing rapidly in the sunshine.

It is the beginning of December and the phrase 'Christmas is coming' has a somewhat threatening tone as the Christmas madness begins on the media and in the shops. As far as I'm concerned Christmas shouldn't really begin until the 24th (though the various small preparations in the week before are enjoyable) but my family see that as curmudgeonly and too Scrooge-like. It is at this time of year that I am more than usually glad we do not have television...the occasional glimpse of the hysterical madness especially on the children's tv is appalling...I sound like a grumpy Granny but what I mean is just keep the whole thing in perspective and don't indulge every wish of already over-indulged children. The small domestic, home-made aspects of Christmas are the most enjoyable not the brash, superficial tinsel of media driven excess. Gosh that sounds so priggish!! Actually, I love Christmas and every family has its own way of celebrating, so each to their own.

On the farming front we have had lot of calves born lately so there is a lot of milk being produced which is good, I think we are sending more milk than we have ever done. The milk tanker has just arrived and the driver has assured us that he will be coming on Christmas Day though maybe a little earlier than usual so that he can home for his Christmas lunch. Like we farmers many of the ancillary workers in the agricultural industry do not get a day off.
All the cattle are in and so the first half of each morning is spent feeding and bedding down. Once that is all done the Farmer & the Sons get on with good weather jobs such as hedge-trimming, and logging to get in the supply of firewood for the next couple years.