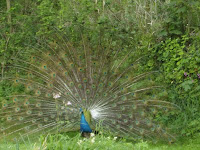 Just before Christmas the Farmer acquired a pair of peacocks, Charlie & Hettie. In order that they did not try to return to their old home they were kept confined in a large and airy loft until it felt they had been here long enough not to make a runner. They were let out a week or so ago and have learned the lay of the land in their new surroundings very happily. Hettie is very unobtrusive and spends a lot of time back in the loft or in one of the cattle sheds while Charlie struts his stuff around the place with great presence and much shrieking. He was in the garden of the farmhouse the other day while we were having tea and through the windows we were able to see his magnificent display of the great fan of his tail...an exotically unlikely sight somehow in a Welsh farm garden, but quite stunning. Hettie was with him at this point and seemed totally unimpressed with his posturing and preeening! 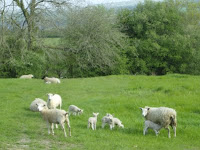 Things are rather quiet on the farming front at present. Lambing has finished and the ewes with their tiny companions trotting alongside are all out in the fields. Lush new grass is now growing apace after the recent rain that fell in the last couple of days, much to Farmer's relief and the fields that have been shut up for silage are beginning to thicken up very nicely with the clover growing very well.

Yesterday the Farmer & I had an opportunity to visit the Lammas Project in Pembrokeshire (http://www.lammas.org.uk/) The Lammas Project  is an eco-hamlet being created under the new 'low impact development' planning policy (Policy 52 JUDP 2006) that was set in place in Pembrokeshire and is now for the whole of Wales.
Under this new policy eco smallholdings can be built in open countryside as long as they are off-grid and blend into the countryside. The people involved in these developments must be working the land, getting 75% of their needs from their smallholdings.
The project is in its second year and the 9 families that are living in this eco-hamlet are working to get their houses built and crops growing. Many of them are living in caravans whilst building cob and straw bale dwellings and in time it will look great. However, we were surprised at how little had been done in terms of growing food  in 2 years. The food production plots were not very large and we could not see how any of the families were going to keep themselves fed. There was almost no livestock to be seen, one family had a few chickens but that was all and there were no decent sized plots of potatoes and other vegetables that would produce sufficient food for a family. When one thinks of the incredibly productive gardens that can still be found on farms, particularly those run by older people, and that have been managed using tried & tested husbandry methods over centuries it seems a pity that the new smallholders do not try to replicate thse amazingly productive gardens. And they all need a pig!
All that said, as a project Lammas is fascinating and it will very interesting to visit it again in couple of years time.
Posted by Jinsy at 03:12