Yesterday I attended a bread making course run by our good friend R. of Mair's Bakehouse (http://www.mairsbakehouse.co.uk/).
R. has the most wonderful wood-fired bread oven in which he bakes the most delicious organic bread much of which is sour-dough.
I and 5 others met in the bakery at 9.30am to learn about making sour dough. It is a curious method of making bread without yeast. Instead of using yeast, a 'leaven' of fermented wheat & water is used. It produces a loaf of bread that is highly digestible and which keeps well.
We spent the first part of the morning mixing up our doughs and then they were left to prove in plastic boxes for a couple of hours. When the dough had proved sufficiently we were shown how to knead & shape the dough correctly using only one hand using the fingers and ball of the thumb. R. can knead two lumps of dough, one in each hand with a speed and dexterity that is very impressive. We were all a little less dextrous! The dough was then put into special baskets to prove again. 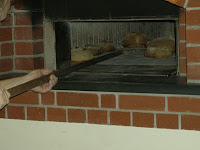 The best part of the day was at about 4.30pm when we put our loaves to bake in the oven. The oven is beautiful; it is 7' deep and a 'peel' is used to put the bread into the oven which had been fired up the day before and we were using the residual heat from the baking session done that night. The heat coming from the oven as one put ones loaves in was intense. The bread was cooked in about 25-30 minutes.
The smell when we took out our loaves again using the peel, was mouth-watering.
The racks of freshly baked loaves were a very satisfying sight at the end of an extremely interesting day.

The organic flours we were using were of two types.
The wholemeal flour came from the lovely recently renovated 17th century water-mill at Llanrhystud, near Aberystwyth, Felin Ganol (http://www.felinganol.co.uk/) & the white flour came from Maud Foster Mill in Lincolnshire.
Posted by Jinsy at 02:47