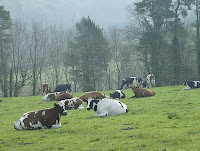 http://www.omsco.co.uk/
Yesterday the Farmer and I attended a meeting with representatives of OMScO  the organic milk co-operative that buys our milk.
The meeting was to give us, the producers, a yearly update on the state of the market in organic milk and how it is being sold.

20-25% of the organic milk produced in UK is being exported to Europe;
62 large milk tankers (1.5 million litres of milk) are crossing the English channel every week and the milk is then distributed to  throughout  France, Holland, Belgium and northern Germany where the demand is growing. In July 2009 the sales of organic milk to Europe were 1475 million litres, by February 2010 the figure had grown to 5425 million litres.
Here in the UK things are not so good. The sales of organic milk for cheese & yoghourt production have fallen, though the demand for liquid milk has remained about the same as last year.
The demand for organic milk in the UK is heavily reliant on promotion and the British government and press are not interested in organics. The Food Standards Agency report that came out last year did not support organic production and there appears to be active opposition to organics the UK. As far as the media are concerned organics are an old story.
In France the demand is growing and the French government is very supportive and encouraging of organic farming. In the USA is has now been ruled that all school meals have to contain an element of organically produced food and this is also happening across Europe but not in Britain. Our buyers are fighting an uphill battle to sell organic milk in Britain and it is the same, if not worse for organic vegetable growers and other producers.
There is a perception here that organic food is expensive. This is not necessarily true. In the larger supermarkets own brand organics are cheaper than established commercial brands such as Kellogs & Nescafe. The consumer likes organics, but sales are heavily dependent on PR in order to keep the public awareness up.
The other fact that was given to us was that the retail price of milk has averaged 82p per litre for the last 2 years, but the price that we get as organic producers has gone down over the same period. At present we are getting about 27- 28p per litre.
Despite all these facts & figures the atmosphere of the meeting was a lot more positive than last year when a room full of organic farmers who really believe in what they are doing, was not a happy place as the buyers were not particularly up-beat about the coming months. However, thanks to the export deals they brokered we are able to see an increase in sales and demand this year. We must hope that the demand will increase here in the UK as more farmers go into organic production on the Continent who will be able to satisfy their home demands and will not require imported British organic milk.

As an antidote to the politics of the milk industry the Farmer & I went on from the meeting which was held in east Pembrokshire, to the lovely small town of Narberth and trauled the antique shops there and then drove over the Prescelli Mountains from where we had superb views of the Irish Sea and the hinterland of Newport  to Newport Beach and walked along the lovely expanse of sand in glorious early evening sunshine.
The tide was out but coming in quite slowly and we walked along the high-tide line through wreaths of bladderwrack and the ribbon seaweed known as furbelows. It is always fascinating to see what has become tangled in the seaweed and we found many hazelnuts and acorns, many of which had been opened by squirrels and even a sprig of holly. How these things end up on  large beach in the knots of seaweed is a puzzle. There were brine-buffed, sea-smoothed small nubbins of wood and a few small shells of musssel and razor and tellins which look like opened butterfly wings. We came across two or three very large jelly fish which had clearly been left by the tide and had dessicated in the sun. There was surprisingly little plastic in the debris, just an occasional bottle top or length of polypropylene rope which glared their vivid colours out of the muted sea-softened tones of the seaweed & sand.

Out walking the dogs in this glorious weather I noticed that the sky is completely clear of vapour trails thanks to the Iclandic volcanoe and the closure of the airports. Our skies are usually criss-crossed with trails of the transatlantic flights, sometimes we have counted as many as 15 or so separate vapour trails at any one time. Today we really do have clear blue skies.
Posted by Jinsy at 02:41