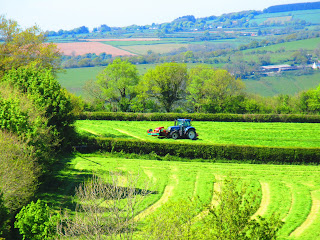 Over a month has gone by since my last post and now we are at the beginning of August and as is usual at this time year things have been very busy. The Farmer and Sons have of course been spending many long hours on tractors bringing in the silage crop and it is now all in and safely sheeted up ready for the winter. In the past weeks we, and the rest of the country have experienced very hot weather though we have been lucky here in the west as temperatures did not reach the heights felt in the south-east of England. It was still nonetheless very hot and much time was spent just sitting in the garden shade too lethargic to do much else. Simple meals of salads were prepared and laundry was done but the daughters-in-law and I found ourselves doing the minimum as regards any other domestic duties. The menfolk did suffer as they still had to work but as long as the air-con in the tractors kept going and they had large quantities of water with them they were okay on the whole. Now we have had several days of much needed rain and today is beautiful with sunshine and a light breeze. One of Wales' major cultural events is taking place this week, the Eisteddfod Genedlaethol (National Eisteddfod) which this year is being held at the small market town of Tregaron up in the Cambrian mountains about 30 miles from here. Each year the eistedddfod is held in a different location around Wales, altenating between north and south. An eisteddfod is a competitive festival of arts and performance that holds a special place in the culture of Wales. Eisteddfodau (the plural form) are held all over Wales culminating in the national event which attracts artists, poets and musicians from across the Welsh speaking world. The Farmer & I hope to go up later in the week to see friends competing in the choral competition and to experience the whole thing having not been before. The school summer holidays started three weeks ago and I'm pleased that I have bookings for the holiday cottage running into September. That said there are fewer visitors around this season and talking to a cafe-owner at the coast yesterday, business is very slow. It is probably due to the price of fuel and the general increase in the cost of living meaning people are thinking carefully about their holiday spending. Even people who own a property in Wales but live in England are thinking twice about the situation, especially as there is a very real problem in the small coastal villages where the majority of properties are not lived all year round. The hamlet we were in yesterday has about a dozen houses only two of which are lived in full time and in another very much larger village just down the coast there are only 6 are occupied full time. This is a situation replicated all around Wales, particularly of course on the coast and it means that the once thriving communities have been eroded, village schools close down, local shops and post offices shut as they cannot survive on the six weeks income brought by visitors in the summer. Also properties have been priced out of reach of local families who would like to stay in the villages where they grew up but cannot afford the properties coming onto the market. It is difficult situation and one that is seeing drastic action being taken by Welsh Government in the form of high council taxes on second homes. Some second home owners are now saying they will sell their holiday properties but the prices are still more than can be realised by local young families. It is going to be interesting watching how this will all play out. 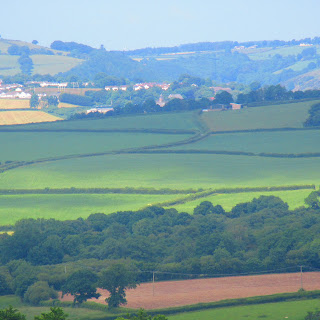