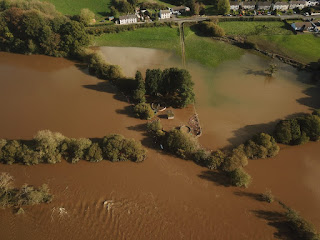 This is the scene near our village over the last weekend when we were battered by Storm Callum. The villages in the Teifi Valley have suffered badly with massive flooding and many houses and businesses have been badly damaged. We here on the farm came of lightly being half way up a hill but we had torrential amounts of water pouring down of the fields and through our yard and several trees came down. Our electricity supply was affected which was frustrating especially at milking times but it was all manageable. The Farmer and I remember the last time this happened 30 years ago. There are strange sights to be seen such as canoes stuck up in trees and silage bales in odd places having been washed down by the torrent. Many of the bridges across the river have been damaged and are closed to traffic which is going to make life difficult for many of us as most of our villages have to be accessed by crossing the river.
The Farmer was hero of the hour going to the aid of some friends of ours who live in an old mill right on the river. When the river water came into their basement the Farmer went down to rescue them and their 5 week old baby before they were completely trapped. As it was he had to piggy-back the new mum down from the first floor of the building as their steps were under water to almost waist height. Mum & baby spent the night with us, the dad having opted to stay put and do what he could to rescue things. Fortunately the water did not quite reach to ceiling of the basement so did not enter their their first floor living area but the resultant mess now that the waters have dropped is pretty awful.
Neighbours have also called upon the Farmer and Sons to go and cut trees that have fallen across their tracks.
The most tragic story from the weekend was of course the death in a landslide of a young man from our small market town. He was known to us slightly and his death has shaken the community far more than the material damage done to bricks and mortar. 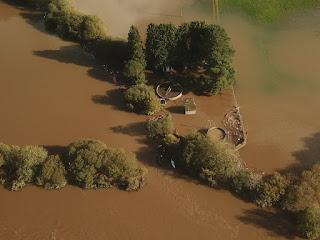