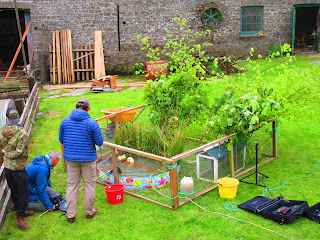 We've had another couple of busy days with the television crew from BBC Wales filming on the farm for a programme about farm animals which will go out later in the year (title to be revealed in due course). This session of filming was centred around ducks. At a poultry sale at the weekend, we purchased four fluffy yellow ducklings and two older 'teenage' ducks. A makeshift pond was built using a children's paddling pool and disguised with reeds and foliage in order for the action of the duckling's feet under water to be filmed using a very clever little camera in a waterproof housing that is connected by WiFi to the cameraman's smart phone...amazing technology! Some great shots of little yellow feet paddling away like mad were obtained and even one of a duckling diving under water.The 'pond' is still on the yard and the ducks are very happy & decorative and much safer than they would be out on the real pond. The last ducks we had were taken, we think, by an otter which had been seen roaming around on several evenings by Younger Son. It is very frustrating for my terrier Dottie though, as she has to be kept tied up as being a true terrier she just cannot help herself needing to catch the ducks. The sheepdogs are no problem, they just watch the ducks through the netting surrounding the pond trying to herd them I think, and the labradors are just not interested. 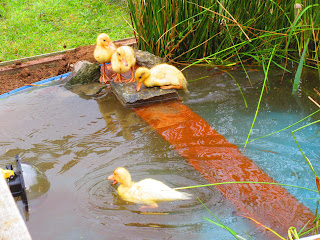 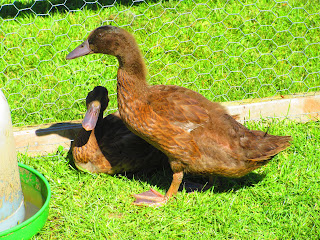