Despite the cold,wet,grey weather the primroses are putting their sweet faces up in the hope of some sunshine and the daffodils are showing their golden trumpets everywhere around the farm and confirming that spring is here,and the birds are determinedly singing their springtime welcome choruses.
I have been laid low with the 'flu-type lurgy that has been rampaging around lately. A fortnight of coughing and lack of energy after 3 days in bed, which surely must be on the wane by now...it is very boring!! especially with such a lot of gardening to be done and general maintenance in the holiday cottage and the farmhouse. Next week I have the decorators coming in so our stairwell and dining-room need to be cleared out and made cob-web-free in preparation for the new clean paintwork. All rather exciting but a lot of work.

Lambing is going well and is nearly over with only a handful of ewes left to pop. It is such a pity that is is so cold though the older lambs cope very well, we don't like putting the very new ones out just yet. 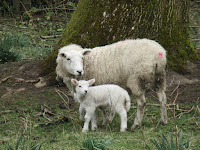 Ten days ago we had a television film crew here for 3 days working on a programme for BBC Wales about farm animals. The filming went well and was the first of several sessions that will occur throughout the summer. The crew return next week and hopefully the weather will have improved for them by then. We have hosted film crews many times over the years and it is always interesting having them here. They are very focussed on their project and there are times when we have to explain that farm animals will not perform to command and that endless patience is required but they almost always get what they want in the end. The Farmer has had to arrange for some pedigree Traditional Welsh pigs to be brought in (all done perfectly legally with the necessary paperwork in place!) and we've had to get some ducks and have a borrowed pony all destined for their 15 minutes of fame, and all rather good fun for us. 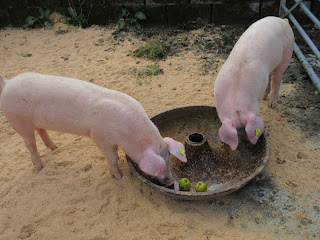 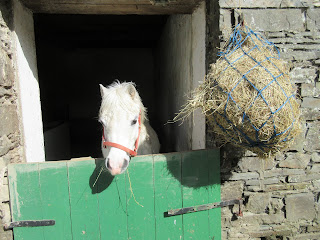