Yesterday the cows went out for the first time onto pasture, always a significant day in the farming calendar. Once the cows realise that they are not going back to their cubicle shed but are being pushed out of the yards and up the lane they bellow with joy and anticipation and once they reach the field they dance in pure happiness. It is sight to be seen. Once the initial euphoria has worn off they settle to serious grazing of the lush fresh grass which must be such a delight after the winter diet of silage. It is such a slow spring this year that we are about ten days late with turnout but that is just the way of things.

The swallows have arrived and their are several pairs swooping around the buildings often with nest-building material in their beaks. They dive into the buildings and up into the rafters where they build their nests that look like little mud-cups attached to the beams.

At the weekend the Farmer, our grand-daughter & I took a picnic to the coast and walked a section of the All Wales Coast Path (www.walescoastpath.gov.uk) near Moylegrove in north Pembrokeshire (www.visitpembrokeshire.com). It was glorious clear sunny day and the views were spectacular. The sea was calm and a most beautiful jade-green colour broken up by the dark patches of the cloud shadows. We saw small groups of oyster-catchers flitting across the water, the ubiquitous gulls floating over the water & rock doves in a shadowy rock 'cauldron' created eons ago by the sea cutting away an arch to form a tiny cove that is inaccessible other than by swimming through the arch,(as the Farmer has done in warmer weather) when the tide is high. 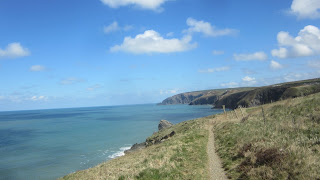 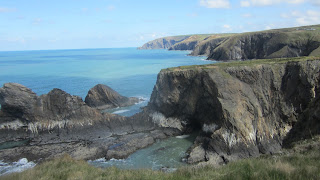 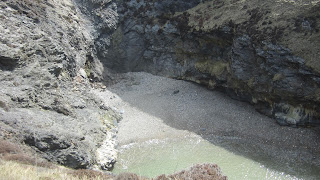