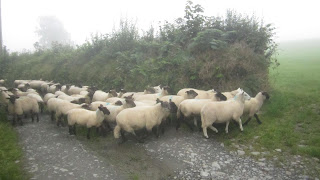 A heart-warming incident has just occurred this morning...A young man, a complete stranger, arrived on the yard to ask if we had any sheep up near the main road as there was a sheep out that had been hit by a car.
As it happens we do have some sheep up in that vicinity, however after some further conversation we established that it was not our sheep but was one of the neighbours tack sheep, so the young chap went up to tell them. I was so impressed that this boy had bothered to interrupt his journey to work to try to find out the owners of the injured ewe. As he said, he couldn't just drive on and leave it as had the driver of the car that had hit it. I hope the hit-&-run driver feels badly about what he has done!
(Tack sheep are sheep that are on land that has been let for sheep over the winter, the flock owner pays the land-owner for the period that the sheep are grazing.)

It is another grey and damp morning with more miserable weather to follow I think. The fields are very squidgy and just walking the dogs one slips and slides on shallow slopes. The streams around the farm are running well with the water eddying and swirling over the stones carrying leaves and twigs down and depositing them in small barrages at intervals creating little pools that slow the flow of the water to the main drains.
The wind is very strong, buffeting & blustering through the trees around the farm and howling down the chimneypots. The doors and windows are rattling with ghostly whistles and moans from the wind as it beats about the house. A day for settling by the fire with good book and some knitting that needs to be done by Christmas.

We had our second part of the TB test at the end of last week and were very disappointed to find we had one cow test positive, so we are under restictions for another four months at least.
Posted by Jinsy at 01:38