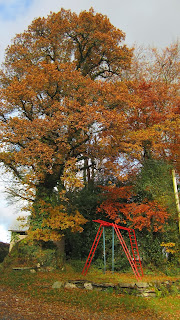 A country funeral, like a country wedding is an event drawing members of a community together.
This week the Farmer, the Sons and I attended the funeral of our good friend & neighbour who died so tragically after being attacked by the stag in his small herd of red deer.
The congregation numbered about 300 people, many of whom had to stand outside the small country church in our local village and will go down as one of largest funerals ever to have been seen in the parish.
It was a coming together of country people of all ages. Our friend had been part of the lives of so many and it was touching to see that there were farmers and others all involved in the countryside, young and old all coming to mourn the passing of a man who had in his quiet and cheerful way lived his life in the farming community and had given his friendship to so many.
I was very touched when our Elder Son was asked to be one of the bearers of the coffin to the graveside. He had known our friend since babyhood and had always had a great respect and fondness for him, so to be asked to take such a role was an honour and a privilege.
It was deeply sad occasion and the neighbourhood is still reeling from what was such a dramatic and ultimately tragic event.
Posted by Jinsy at 04:09