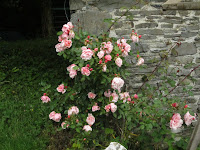 Alongside the national rejoicing at the birth of Baby Cambridge we have had a flurry of babies locally. Two sets of friends & neighbours have produced thier babies in the last fortnight and we have our second grandchild due at the end of August plus other friends & neighbours are expecting at various times during the autumn. Babies everywhere!
We had a visit from one of the babes last evening. Tiny week old Theodore called in with his delighted parents to be introduced to us. He was beautiful, of course but one does forget how very small new babies are.

The weather of course is a continual topic of conversation and the intense heat lately has been very trying for our expectant mum (& our pregnant labrador!) and for the babies that have already arrived. Todya it is cooler and overcast though we have not had the thunderstorms that hve occurred elsewhere.
The Sons went off early this morning to the Royal Welsh Show at Builth Wells and they are fortunate that it has cooled off rather as a day at the show in searing heat is not pleasant. Now that the madness of the hay & silage harvest has ended the boys have taken a day off to go & gloat over shiny new farm machinery and talk techy stuff with reps. ...I doubt they will see much else other than a visit to the cattle sheds & possibly the beer tent! No flower shows or craft exhibitions for them!