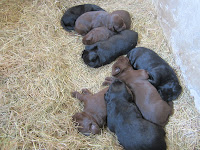 The puppies are now two weeks old and have grown hugely. This morning was the first day when their eyes are properly open and they were so funny trying to lumber around their nest and discovering thier siblings. Up to now of course they have lived in a world of smells and warmth, needing to be in huddles for warmth and now with vision, albeit rather blurry, they can start to explore. This next week will see them rapidly change into jolly playful pups & hopefully if the sun is shining they will be able to play outside.

We have started calving and so far have had an excellent start with two sets of heifer twins which is very unusual. One pair of twins was real surprise to us as the cow had calved out in the field and when Elder Son & the Farmer brought her in they brought one calf with her, it being the only calf to be seen. The reasonable thought was that she just had the one  as twins are unusual as I've said.  However, 36 hours (!!!!) later our neighbour from the bottom of the farm appeared saying that he had found a very small calf on the woodland track between his place & ours, which surprised him & us not a little. On investigation this small creature was the twin to one brought in two nights before and must have been lying hidden in undergrowth and had then toppled down the steep wooded bank to the trackway. It was completely unharmed and perfectly fit & healthy. The Farmer  reckons it had fed very well before going to sleep in clump of bracken where it was so well concealed, which had seen it through its ordeal. It is extraodinary how well baby creatures can survive, though admittedly she probably would not have coped with another night out. Thank goodness our neighbour walks up the track every day excercising his dog in our lower fields.

We have entered the spider & daddy-longlegs season...they are everywhere. I am constantly having to clear them away from corners, unfortunately they are particularly fond of the holiday cottage & I have real battle keeping the place as free of them as I can. Old country cottages & farmhouses are much more organic than town houses, we have nature encroaching upon us at every opportunity, having had bats flying around in the farmhouse these last few evenings (though they soon find they way out through the open windows again) as well as the spiders, moths, daddy-longlegs & beautiful shiny black beetles than venture over the doorstep.
Posted by Jinsy at 04:23