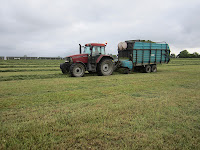 While the rest of the nation was watching the end of the Olympics here in the countryside the need to cut yet more grass for winter fodder was upon us as we had few dry hot days again...the Farmer & Sons have spent the last three long days on silage again & now it is pouring with rain once more.
As I don't get involved with tractors driving, thank goodness, I was able to view some of the last Olympic events including the Men's Marathon...such a triumph for the Ugandan winner!
We did watch the Closing Ceremony which was great fun, even the Farmer watched it to the end despite his grumpiness about it starting so late. The party atmosphere was wonderful and the whole thing, while still having a very surreal quality about it as did the Opening Ceremony, seemed to work. Timothy Spall as Churchill declaiming Shakespeare was definitely bizarre (& when is Mr Spall going to become Sir Timothy?) & Ray Davies performing 'Waterloo Sunset' was great. Once again it was all just quite mad & Britishly (?) eccentric & huge fun.
I hope the athletes can all go home feeling that London had given them a massive 'thank you' concert.
Posted by Jinsy at 02:06