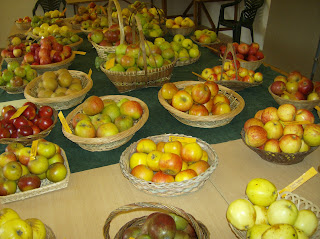 Yesterday the Farmer & I went up to Llanechaeron, the National Trust House near Aberaeron, to take part in the filming of a children's television programme for S4C. The programme, Cyw, has a character called Rapsgaliwn, who goes around showing various processes & methods covering a large variety of subjects. Yesterday it was how apples are made into juice.
We arrived at Llanerchaeron with all the apple pulping & juicing equipment which we set up in one of the glasshouses near the lovely orchards and the Farmer duly made apple juice and the process was filmed with Rapsgaliwn explaining to his two child co-presenters what was going on. The programme will be going out sometime in February.

It has been Apple Week at Llanechaeron and there was the most wonderful display of of over 40 varieties of apples, all grown in the gardens on the estate, including a number of old Welsh varieties.. Many of them were very old, some dating back to the 17th century such as Catshead (1600's) & Devonshire Quarrenden (1676). They have such lovely names, Orleans Reinette (1776), Cambusnethean Pippin (1750) & Roemary Russett (1831) and the variations in colour, shape and uses is amazing. The smell as one walked into the Apple Room was overpowering and just delicious.

Whilst the Farmer was occupied with the film crew, I went for a wander around the gardens and found the huge lake in the woods that has been reinstated only in the last three years or so. It was looking glorious with vast beech trees all in golden livery and a flotilla of mallards dotted about on the water patrolling their territory around the two islands. There is a also a well established heronry on the islands.

As I walked along the path around the lake I came across a small headstone tucked into the side of the path under a large beech tree.
it had inscribed uopn it the following;

Vic
26, June 1919
Aged 13 years
Vic must have been a much loved & faithful dog, a companion to one of the Ponsonby-Lewes's  of the time.
I had half expected to find other dog memorials but Vic was clearly the only one that merited such a remembrance.
We have a large standing stone here at Penyrallt, known as the Dog Stone which marks the grave of one of our dear sheepdogs, Ted and is a memorial to all our many dogs over the years, though it does not have their names carved on it...if any of us had the necessary skills it would have an impressive list carved uopn it. It is surprising how many dogs one family can have over a quarter of a century.
Posted by Jinsy at 07:16